The Economic and Financial Crimes Commission, EFCC, secured a total of 3785 (Three Thousand Seven Hundred and Eighty-five) convictions across all its Commands in 2022. 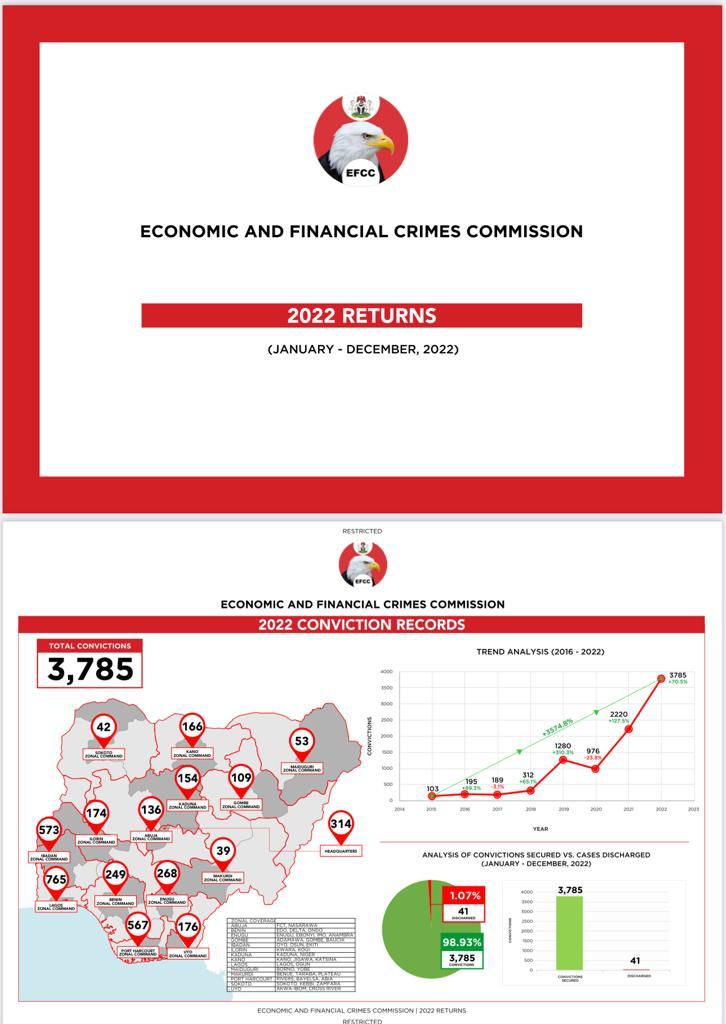 The figure, which emerged from a review of the commission’s performance in the outgone year, shows a 70.5% improvement over its record for 2021(2220). It also represents a 98.93% success rate in prosecution given that the Commission lost only 41 cases, representing 1.07% within the period

As it was in 2021, the Lagos Command of the Agency recorded the most convictions-765, closely followed by the Ibadan Command with 573 convictions and the Port Harcourt Zonal Command- with 567, while the headquarters recorded 314 convictions.

The conviction secured by the Commission in 2022 is the highest by the EFCC Since its inception and sustains an upward trajectory that began shortly after the emergence of the administration of President Muhammadu Buhari.

The Buhari administration was elected in 2015 on a tripod of promises- anti-corruption, economic recovery, and security. In 2015, EFCC recorded a total of 103 convictions.

The percentile improvement of the EFCC convictions in the seven years of the Buhari administration from 103 to 3785, is over 3574.8%.

Commenting on the performance, the Executive Chairman of the EFCC, Abdulrasheed Bawa, commended the personnel of the Commission for their industry and dedication despite the challenges of criminal prosecution in court.

He assured that the EFCC will continue to motivate all categories of staff for greater efficiency through capacity development and other incentives.

The suspects are two males, Cornelius Ememah, and Nelson Aghogho, and one female, Ufuoma Tunde.