The return of a giant python is being celebrated by some indigenes of Fugar community in Edo state.

A video circulating on social media shows the celebrating the return of the giant python which they claimed is their “mother”.

The indigenes expressed excitement over the new year visit, and carried out a ritual for their “mother” who they called endearing names.

In the video, a man could be seen sitting on the bare floor with the reptile around his neck and is seen hugging it endearingly.

The videos has gone viral as stirred a lot of reactions from social media users who shared their thoughts on the traditional event.

@chrisidiuje wrote, “My only sincere concern here, is where “the mother” go before?”

@tahkain_fashion_event10 wrote, “People’s culture, Religion, and beliefs must be respected. The inability to respect ones opinions is where our problems are!”

@prettyakpagher wrote, “How can a human being be mothered by a snake? ” My people perish for lack of knowledge” Lord help your people”

@_symplyosas wrote, “I’m from Edo state and this one no be my mama, I know my mama when I see her. Which one be their mother 😏”

KanyiDaily had also reported how a man who loves snake, was strangled to death by his own pet python after the reptile roamed tight around his neck. 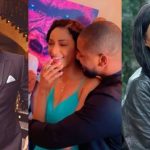 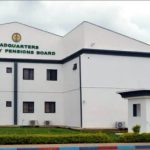