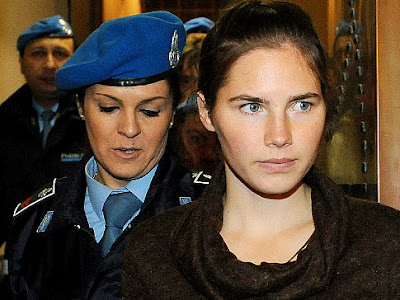 Amanda Knox is officially a free woman after four years behind bars in Italy.

The American exchange student who was convicted in the 2007 slaying
of British university student Meredith Kercher was acquitted today
around 3:30 EST in an Italian appeals court.

Before today’s ruling Knox read a statement to the court, that partially read,
“I am not what they say, the perversion, the violence, the lack
of respect for life and for the person, that doesn’t belong to me. And I
did not do the thing they suggest I had done. I did not kill, I did not
rape, I did not steal, I was not there. I was not present at that
crime.”

Her boyfriend Raffaele Sollecito was also freed and took off a
symbolic bracelet that he’s been wearing for the four years they’ve been
incarcerated emblazoned with“Free Amanda and Raffaele.”

“Now I have never taken it off,” he told the court. “Many emotions are concentrated in this bracelet. Now I want to pay homage to the court. The moment to take it off has arrived.”