A 46-year-old man, Femi Abosede,
was on Tuesday arraigned before an Igbosere Magistrate’s Court, Lagos
for attempting to sell a building belonging to a dead man.
The police said Abosede forged documents relating to the building located at Bakare Estate, Ajiran Agungi, Ajah, Lagos. The N45m building belongs to the late Eugene Okolosi.
Abosede allegedly forged some documents such as a deed of
assignment, a letter of termination of attorney, oath of administration,
a treasury receipt from Lagos State Government and a declaration as
Okolosi’s next of kin.
The police said Abosede and others at large forged the documents
and dishonestly changed the title of ownership of the property in order
to sell it off.
The charge sheet reads in part, “That you, Femi Abosede, and others
at large on May 25 did conspire among yourselves to commit felony to
wit forgery.
“That you Abosede and others at large did dishonestly convert a
house belonging to the late Okolosi, valued at N45m to your own with
intent to sell the property.”
Abosede is charged with three counts bordering on conspiracy, felony and forgery.
Police Prosecutor, Frank Inah, said the offences were punishable
under sections 409, 363 and 278 of the Criminal Laws of Lagos State,
2011.
The deceased’s brother, Patrick, confirmed to the court that the building was yet to be sold.
Abosede however pleaded not guilty to the charges when his plea was taken.
His lawyer, Mr. I.O. Nveme, argued that the accused was innocent of
the charges and urged the court to grant him bail on liberal terms.
He assured the court that the accused would produce credible sureties if granted bail.
Magistrate C.J. Momodu granted him bail in the sum of N100,000 with one responsible surety in like sum.
She added that the surety, who must be resident in Lagos State,
must furnish the court with evidence of income tax payment to the state
government in the last two years.
via Punch 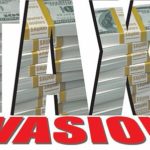