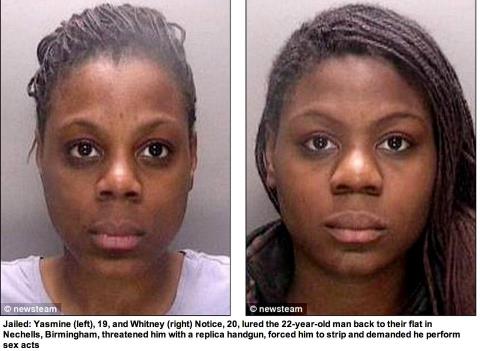 A pair of cruel sisters have been jailed after they subjected a man described as a “vulnerable adult” to a degrading sexual assault and sent photos of the abuse to friends on a BlackBerry Messenger.
Twisted Yasmine, 19, and Whitney Notice, 20, lured the man back to their flat after meeting him over social media. After plying the 22-year-old victim with cider, they threatened him with a fake handgun, forced him to strip and demanded he perform sex acts.
Hmmmm do you think any Naija man would report, that he has been raped by two sisters?……..continue reading
Specialists from the Public Protection Unit were able to track the images to Yasmine’s phone.
Birmingham Crown Court heard how the pair sexually humiliated him purely for their own wicked amusement.
Yasmine was sentenced to seven years and two months behind bars, while Whitney was jailed for five years and four months.
Detective Constable Emma Fennon said: “They targeted the man with the express intention of humiliating him for their own pleasure. They even recorded the abuse and boasted about their actions to friends.
“In the video the man, who is a vulnerable adult, can be seen cowering, fearing for his life, whilst the girls are heard laughing in the background.
“We believe this may not have been the first time they have carried out such abuse as other images discovered on their phones suggest there could be more victims.
“If anyone has suffered such abuse they should report it to police.The matter will be dealt with sensitively by officers specially trained to support victims.”
Both sisters admitted assault, false imprisonment, and causing a person to engage in sexual activity on February 3 this year.
Whitney also pleaded guilty to possessing an imitation firearm.
The sisters were ordered to register as sex offenders for life.

Woman Arrested For Sleeping With Dogs