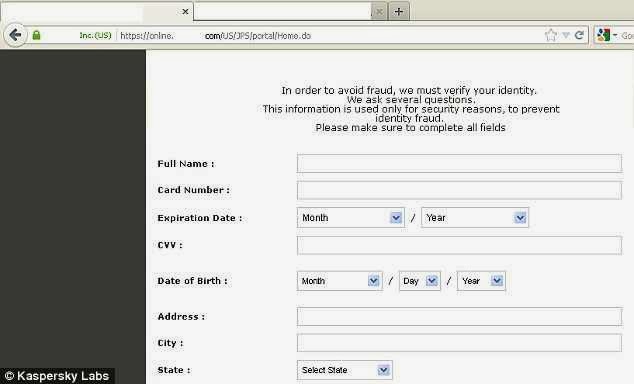 A team of Russian cybercriminals have created a computer virus so sophisticated it can steal the money from any bank account in any country. Called the Neverquest Trojan, it lies hidden on malicious websites or infected computers and can steal the usernames and passwords for people’s online banking accounts.
Once it has access to these accounts it can empty them completely and is so advanced, security experts are warning that traditional antivirus software isn’t enough to keep users protected.This is because the Trojan has been designed to contain ‘just about every possible trick’ known to hackers to avoid being caught and disabled
According to security firm Kaspersky Lab, Neverquest has already made ‘several thousand attempts’ to infect computers and is targeting some of the world’s biggest banks and investment companies.
A total of 28 major websites are under threat and Fidelity Investments is the main target
Once a computer is infected, Neverquest can record the usernames and passwords to online bank accounts and this information is then sent to anonymous hackers who can then use these to details to gain access to the accounts
After gaining access to a user’s account, cybercriminals make transactions and transfer money from the user to their own accounts or – to keep the trail from leading directly to them – to the accounts of other victims.
Kaspersky Lab also said that protection against threats such as Neverquest requires more than ‘just standard antivirus’ and advises customers to be extra vigilant to make sure they only access official sites and don’t store passwords in cookies, or on their computers. Browsers should be kept up to date, too.
Via – Daily Mail