Forbes magazine has released its 2014 list of The 10 Most Powerful Men In Africa and 3 Nigerians made it to the list, also in Memorian is the Late Komlar Dumor of BBC focus on Africa.
January Makamba, Tanzania, Deputy Minister of Communication, Science & Technology and Member of Parliament
Makamba is one of Tanzania‘s rising stars in government. He is currently the Deputy Minister of Communication, Science and Technology and is rumored to run for President in 2015. Makamba is a Member of Parliament for Bumbuli constituency in the National Assembly of Tanzania. Before running for the Bumbuli parliamentary seat, Makamba was aide to Tanzanian President Jakaya Kikwete for 5 years. Named Young Global Leader class of 2013 by the World Economic Forum, Makamba comes from a political family; his father, Yusuf Makamba was Secretary General of the ruling CCM party. In 2013 Makamba was awarded an NDI Democracy Award by the National Democratic Institute which “honors individuals and organizations that have exhibited a sustained commitment to democracy and human rights, and have demonstrated leadership, integrity and courage in their dedication to democratic values and practices”.
Chinedu Echeruo, Nigeria, Tech Entrepreneur & Founder of Hopstop.com and Tripology.com

Mohammed Dewji, Tanzania, Group Chief Executive Officer of Mohammed Enterprises Tanzania Limited
Dewji is the Group Chief Executive Officer of Mohammed Enterprises Tanzania Limited (MeTL) and at 39 is the youngest member of the Forbes’ Africa’s 50 Richest list with an estimated networth of USD $500 million. The MeTL Group began as a family business, a small trading company which Mohammed transformed into one of the largest industrial conglomerates in East Africa, with interests ranging from real estate, agriculture, finance, distribution and manufacturing. The company employs more than 24,000 people across Tanzania and according to Dewji, generates annual revenues of USD$1.3 billion. Dewji has been a Member of Parliament in the National Assembly of Tanzania since 2005. Dewji graduated from Georgetown University with a degree in International Business and Finance with a minor in Theology.
Kola Karim, Nigeria, Group Managing Director and Chief Executive Officer of Shoreline Energy International
Karim is the Group Managing Director and Chief Executive Officer of Shoreline Energy International, a Nigerian conglomerate with interests that span oil & gas, power generation, engineering, commodities trading, infrastructure and construction across sub-Saharan Africa. In 2012, Shoreline Energy partnered with U.K-based Heritage Oil in acquiring a stake in OML 30, an oilfield asset in Nigeria for a reported $850 million. An avid polo player, Karim was named Young Global Leader class of 2008 by the World Economic Forum.
Ashish Thakkar, Uganda, Founder and Managing Director of Mara Group, Mara Foundation and Mara Online
Thakkar is the Founder and Managing Director of Mara Group, a diversified conglomerate with approximately USD $100 million in revenues, according to Thakkar. The group operates in operates in 19 of the 46 sub-Saharan African nations, as well as in India and the United Arab Emirates. Headquartered in Dubai, Mara Group participates in sectors ranging from financial services, information and communications technology, renewable energy, real estate and tourism. Thakkar also launched Mara Online, a portfolio of online and mobile platforms that allow users to communicate, interact and collaborate with each other. The serial entrepreneur also serves on the advisory panels to the Presidents of Tanzania and Uganda and runs Mara Foundation, a social enterprise that mentors young African entrepreneurs. He signed up for Virgin Galactic‘s first mission to space.
Mamadou Toure, Cameroon, Founder and Executive Director of Africa 2.0
Toure is the founder and Chairman of Africa 2.0, an initiative-driven advocacy group that brings together emerging leaders representing African countries and the diaspora, who share a common vision of the continent’s future. In 3 years of existence Africa 2.0 has already grown into an organization with a global footprint in 26 countries and rallied some of the most influential continental and global leaders. As the Managing Director with General Electric (GE) Africa, Toure currently leads a regional Investments and Project Finance team supporting all GE businesses (power, water, mining, oil & gas, transportation, healthcare, aviation) with financing solutions across sub-Saharan Africa. Toure received a distinction as “New Leader for Tomorrow” by the Crans Montana Forum in 2011. He was selected in 2012 as of one of the 100 Most Influential Africans by the New African Magazine. In 2013, Toure was ranked among the “25 Faces of the new Africa” by BRICS Business Magazine
Amadou Mahtar Ba, Senegal, Founder and Chief Executive Officer of the African Media Initiative
Mahtar Ba is the Founder and Chief Executive Officer of the African Media Initiative (AMI), a pan-African organization aimed at strengthening the media sector in Africa. Ba is also a co-founder and Chairman of AllAfrica Global Media, Inc – owner and operator of AllAfrica.com, one of the largest distributor of African news and information worldwide. For three years in a row, Mahtar Ba has been selected as one of the 100 Most Influential Africans by the New African Magazine, in 2011, 2012 and 2013 respectively. He was also listed in the top 500 Africans contributing to the rise of the continent by the Africa24 magazine published in March, 2011.

Simdul Shagaya, Nigeria – Tech Entrepreneur and Founder of Konga.com and DealDey.com
Shagaya is the founder and CEO of Konga.com, Nigeria’s largest online shopping portal and DealDey spinoff site. Konga.com, Africa’s answer to Amazon.com, is an e-commerce platform that sells goods and services directly to consumers. Shagaya is also the founder & Executive Chairman of DealDey Limited, which offers services and products at discounted prices. In 2013 Shagaya won the All Africa Business Leaders Awards’ Entrepreneur of the Year award. HumanIPO selected Konga.com as one of the African technology startups of 2013. Shagaya is a graduate of George Washington University, Dartmouth College and holds an M.B.A. from Harvard Business School.

Ben Magara, Zimbabwe, Chief Executive Officer and Director of Lonmin
Recently appointed as the Chief Executive Officer and as a Director of Lonmin, the world’s third-largest platinum mining company, Magara is tasked with improving industrial relations and guiding the platinum miner’s turnaround strategy after strikes last year triggered violence which killed 46 people including 34 strikers shot dead by police in a single day at its Marikana mine. With a mining career that spans 26 years, Magara was previously the Chief Executive Officer of Anglo Coal South Africa responsible for Anglo American total coal business in South Africa and revenues of around USD $2 billion. Magara, who speaks seven languages, has a degree in Mining Engineering from the University of Zimbabwe.
Komla Dumor, Ghana, Lead Presenter on “Focus On Africa” and BBC World News’ European morning segment
In memoriam. The highly-respected presenter of “Focus on Africa”, BBC’s flagship and first-ever dedicated daily TV news show on BBC World News died of cardiac arrest on January 18 earlier this year at his home in London. Dumor, who was named one of “100 Most Influential Africans” in 2013 by New African magazine, had “established himself as one of the emerging African faces of global broadcasting.”As a lead presenter for BBC World, Dumor had considerable influence on how the continent is covered.
He leaves behind a powerful and enduring legacy; how the continent is reported. “There’s so much more to tell about Africa than the usual stories about war, famine and disease.” 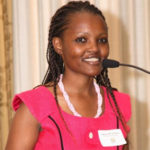