Minister of Interior, Abba Moro, has blamed the unfortunate stampede and death of applicants to the Nigeria Immigration Service, on the victims, saying the victims of the stampede across the nation were impatient.

“The applicants lost their lives due to impatience, they did not follow the laid down procedures spelt out to them before the exercise, many of them jumped through the fences of affected centers and did not conduct themselves in an orderly manner to make the exercise a smooth one. This caused stampede and made the environment insecure”, he said in Jos this evening.

This can only happen in an uncivilized society like ours? By Monday, it’s of course business as usual, as if nothing happened over the weekend. Nobody cares, human lives here seem not better than that of animals which is why Nigerians keep dying every other day either to Fulani Herbsmen or Boko Haram. And looks helplessly unstoppable.

A country that really cares by now would have told NIS head to step down and ensure heads roll for those yesterday deaths….continue to see more from the Minister.

He however informed that 520, 000 people applied for the exercise across the country, the centers were spread to avoid overcrowding adding that only 4,556 will be recruited at the end of the exercise based on the available space.

Moro disclosed that the Deputy Controller of Immigration Operation and Passport told him that he has cancelled the exercise in Lagos due to the unruly behaviors of the applicants and told the them to wait for further directives.

According to him, the Ministry of Interior embarked on the process to ensure transparency adding that the mistake will form a base for how to organise future exercise. 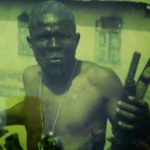