A 32-year-old man Yusuf Siyaka aka Ciaxon who tweeted live photos of attempted jailbreak at the SSS headquarters on March 30 and was later illegally detained for 12 days, was paid to tweet the sensational images, secret police said.
According to the spokesperson of the Department State Services, Marilyn Ogar, the blogger admitted during interrogation to covering the operation for “pecuniary reasons”, which many analysts didn’t believe though.
Meanwhile the spokesperson didn’t say who and how much paid Siyaka for covering the operation.
Rebutting this claim, some activists and bloggers said he could not have tweeted for money because he ran into the battle accidentally and didn’t know what was going to happen.
Siyaka was intimidated and held for so long to help the SSS maintain a single story about the gun-battle.
The SSS feared he would have distorted their narrative of what happened that day if not arrested.
“If he was not in custody, he would have been a hot source for media organizations and diplomats.”

Released on Saturday, the blogger refused to comment on any SSS claims when contacted by journalists.
Those who met Siyaka after he had been freed claimed he still looks terrified and visibly traumatised. 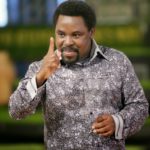