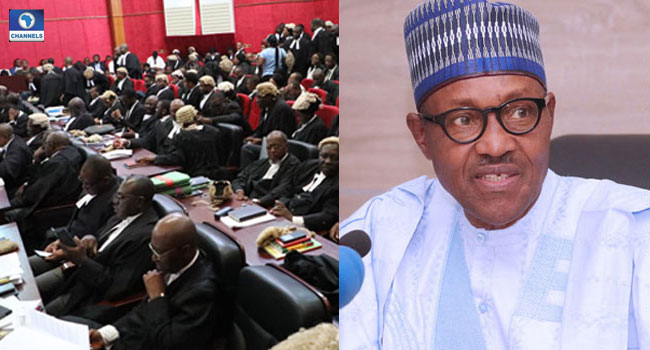 The Presidential Election Petitions Tribunal has dismissed the suit filed by the Hope Democratic Party (HDP) and its Presidential Candidate, Ambrose Aworu, seeking to stop President Muhammadu Buhari’s inauguration on May 29.

In a lead judgment delivered by Justice Joseph Ikyechi, the tribunal dismissed the application for lacking merit.

Respondents in the suit which include the President, his party the All Progressives Congress (APC) and the Independent National Electoral Commission (INEC) faulted the application and asked the tribunal to dismiss it for lacking merit.

The HDP in its application said it will be unfair and unjust to inaugurate President Buhari for a second term on the ground that the validity of the election that produced him has been challenged at the tribunal.

The party also prayed for an order stopping the Chief Justice of Nigeria (CJN), Ibrahim Tanko Mohammad from inaugurating or administering the Oath of Office and Oath of Allegiance on him (Buhari) until all court actions against him are determined.

The two petitioners said they are challenging the validity of President Buhari’s election on the ground of non- compliance with the electoral laws and have dully served the President, INEC and the APC despite notice of hearing of their petition against his election.

They noted that the President has been making frantic efforts and preparations to be sworn in and inaugurated on May 29 by inviting the CJN and the general public. They, therefore, insisted that restraining order by the tribunal is appropriate to preserve the subject matter of their petition and rendering their petition nugatory.