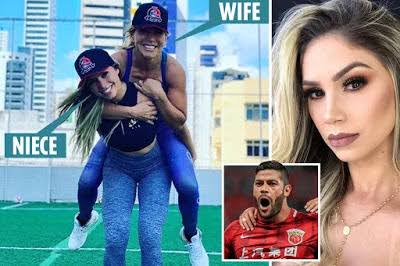 Former Brazil International, Givanildo Vieira de Sousa, also known by his field name as Hulk, has reportedly been dating the niece of his wife following the end of their 12-year-old marriage.

The 33-year-old striker reportedly split with his wife Iran back in July, and they have three children together, sons Ian, 10 and Tiago, 8, and daughter Alice 6.

His representatives confirmed he has been dating his former niece-in-law Camila since October, who has since been forced to delete her social media accounts.

Hulk reportedly “made the information public”, insisting he “doesn’t have anything to hide.”

“It’s in his position to be transparent, to avoid lies and malicious comments.

“Remember the Brazilian’s marriage ended in July and Camila was also separated for many months,” a representative for the player told UOL Esporte.

The representative said Hulk told his family and children about the relationship and, on the same day, called Camila’s parents and brother.

Camila, who was Iran’s ‘favourite niece’, took to her social media page to explain herself. She wrote:

“Aunt Iran, I first want to tell you that this message is not an explanation or justification of anything.

“I needed to tell you some things that unfortunately circumstances do not allow me to say personally.

“Although it is irrelevant to you now, I love you very much and care about you, so I am speaking here.

“I really want you to know things that maybe everyone will talk about differently, mere speculation, but I don’t really judge them because outsiders know absolutely nothing and most of the time just want the situation to be worse.

“It’s been very hard to face all this, but I wouldn’t do it if it wasn’t true.”

Camila has since deleted her social media accounts following the backlash.

Iran has also had her say on her ex-husband’s new relationship with her niece.

She told UOL columnist Leo Dias: “It is deeply regretted that Mr Hulk, not content with ending a marriage of more than 12 years, he then did not respect the pain of the one who always devoted love, affection, respect and consideration to him – as well as his children, whose supreme interests should be preserved by their father.”

UEFA Champions League Round Of 16 Draw: Find Out Who Your Favorite Team Is Playing