Andrew Momodu, a former aide to the ex-National Chairman of the All Progressives Congress (APC), Adams Oshiomhole, has dumped the ruling party and defected to the Peoples Democratic Party (PDP). 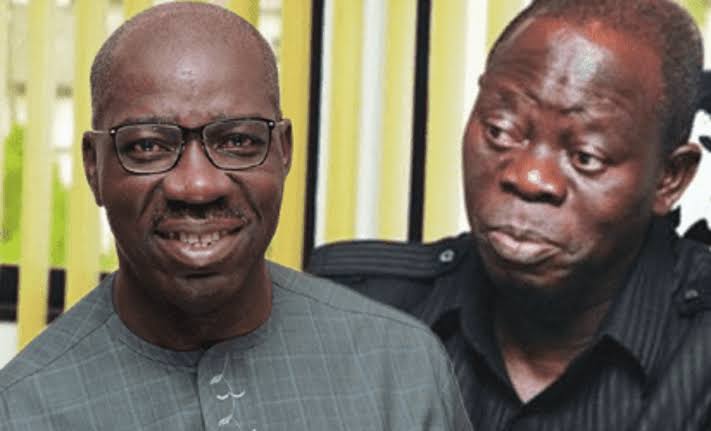 Momodu also promised to support the re-election of Governor Godwin Obaseki of Edo State by pledging the sum of N5 million for his campaign during PDP governorship campaign rally in Ward 8, Anwain, Etsako West Local Government Area of the state on Tuesday.

He made the pledge on behalf of Anwain Progressives Union (APU), the umbrella Union of Anwain Clan after hundreds of APC members in the area defected to the Peoples Democratic Party (PDP) at the event.

Momodu assured Governor Obaseki that 6,000 votes from the ward would be cast for the PDP in the forthcoming poll to appreciate him for attracting development to the area, particularly the ongoing Agbede-Anwain road construction.

“The Anwain Progressives Union, the umbrella union of Anwain Clan, has resolved to support Governor Obaseki with N5 million for his campaign,” he said.

“We have collected our PVCs and have all resolved to give the governor 100 per cent of our votes come September 19, 2020. We are sure of giving you 6,000 votes from this ward.”

Addressing the PDP supporters in Anwain and Idegun communities, Governor Obaseki promised to reciprocate the kindness shown him by prioritising healthcare, education and agriculture, among others in the second term of his administration if re-elected.

“Since I started this campaign, this is the only place where indigenes are donating money to support my campaign. I am very grateful,” he said

This is coming barely 24 hours after Governor Obaseki accused Oshiomhole of importing assassins to kill the state’s commissioner for youth, Hon. Damian Lawani.

READ:  Fulani Herdsmen Have Started Relocating To Kano For Their Safety - MACBAN

“My Wife Assaults Me, I Get Dirty Slaps From Her Regularly” – Man Seeking Divorce Tells Court