The deputy governor of Ondo State, Agboola Ajayi has officially defected to the Zenith Labour Party (ZLP) from the Peoples Democratic Party (PDP) after weeks of speculation. 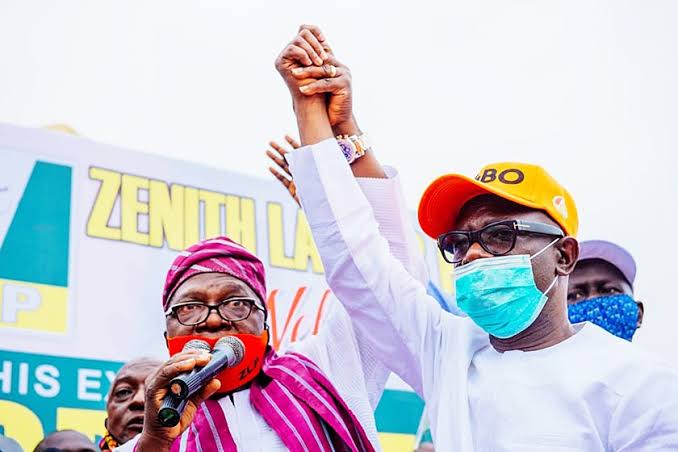 KanyiDaily recalls that Ajayi had resigned his membership of the All Progressives Congress (APC), and joined the PDP in order to contest the forthcoming Ondo governorship election.

However, his plans were shattered when he lost the PDP governorship primary election to Eyitayo Jegede, a former Attorney General and Commissioner for Justice in Ondo State.

On Thursday, August 10, 2020, the deputy governor left the PDP to pitch tent with the ZLP having been promised the party’s governorship ticket.

Ajayi was received into ZLP by the party’s state Chairman, Mr Joseph Akinlaja, and the National Leader of the party, who is also a former governor of the state, Dr Olusegun Mimiko.

READ:  Aregbesola As Osun Governor, Paid For My Election With His Monthly Salary – Senator Abbo

Speaking during the welcoming ceremony on Friday, August 14, Agboola told the huge crowd that he is running from one political party to another because of the people of Ondo.

“It is obvious that the affirmation of Governor Oluwarotimi Akeredolu as candidate of the APC coupled with the seeming failure of the PDP to produce a dependable and formidable alternative has dampened the democratic enthusiasm and morale of the people.

“The hope and rechannel the energy of the progressive electorates, I am teaming up with members of the ZLP, a chunk of most of the other members and my teeming allies from both the PDP and APC.”

He described the ZLP as a dependable platform to rescue the people of the state from the hands of the current government of APC in the state.

The deputy governor also asked his supporters to join him in the Zenith Labour Party, noting that there was need to change and take it back from the “nepotistic administration” of Governor Akeredolu.

Meanwhile, Ondo Governor, Rotimi Akeredolu has now picked Mr. Lucky Ayedatiwa as his running mate for the October 10 governorship election in the state.