Popular Nigerian singer, Davido has denied reports suggesting he denied taking part in protest against the extrajudicial activities of the now-defunct Special Anti-Robbery Squad (SARS) in the country. 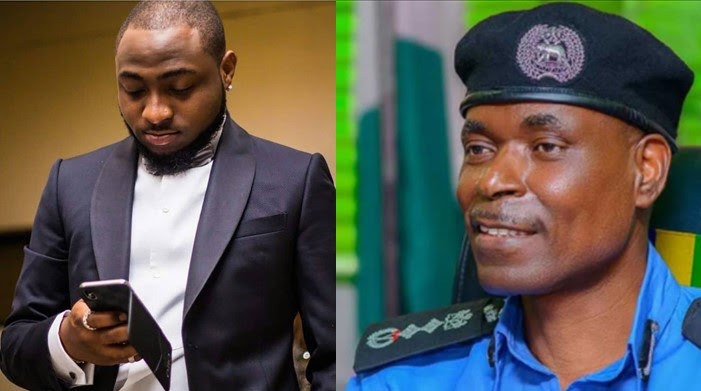 On Sunday. Davido announced that he will be meeting with the Inspector-General of Police, Mohammed Adamu, on Monday, October 12, 2020.

During a brief meeting on Monday with the Police spokesperson, Frank Mba, Davido was alleged to have denied participating in the EndSARS protest, saying he only came to the protest venue in Abuja to calm things down because the protesters were his fans.

The singer had insisted that he wanted an open-door meeting, but the police Frank Mba said, ”How can you come here for a closed-door meeting, when you were protesting yesterday and you identified with the protesters?

Davido responded, ”I did not protest, I was not there to protest. I was there to calm things down because the protesters are my fans.”

However, Frank Mba maintained that Davido had taken an action that projected him as playing a true voice for young people, adding that the agenda of the meeting needed to be streamlined.

After his meeting with IGP Adamu, Davido shared details of what transpired between him and the police boss, and also described as lies reports that he denied protesting in Abuja.

READ:  Onyeka Nwelue Says "Anyone That Eats And Drinks At A Funeral Lacks Conscience"

Davido in a statement issued on his Twitter page, said his comments were taken out of context, noting that he actually admitted being part of protest, but was not their in Abuja to cause trouble or damage.

““Today my team and I met with the IG of police at their headquarters in Abuja to discuss the #EndSARS protests and the way forward.

I want to make it clear that I never went there to deny protesting. My comment was taken out of context. I was trying to explain that I was not at the protest to cause trouble or fight as you can hear me say in the video, but rather I was there in solidarity with every Nigerian demanding an end to police brutality. I was also explaining to Mr Frank Mba, the Force PRO, that my intention on leaving Lagos for Abuja was not to lead a protest like many had thought. I had finally secured an invitation from the IG of police to come to Abuja for a stakeholders meeting scheduled for Mon day morning. That was the reason for my trip and for my Abuja tweets.

As for the talk doing rounds about me going to ‘deny protesting and lie due to intimidation or whatever. It’s a shame that at this particular time lies have to be spread by blogs that should be focused on fighting for the cause, and a shame that I have to explain myself, but I have to.

Mr. Mba had seen videos and pictures of myself on social media protesting in solidarity alongside my fellow Nigerians and asked what happened as he also knew that was not the plan. I then ex plained the reason I got involved with the protesters and led them down to Force HQ so I could dialogue with the officers in charge who were accused of effecting arrests. I was there until we were given assurance that all protesters were released and we left shortly after. Hence my ‘I didn’t protest explanation. I am not one to fear police or fear protests.

I had someone record on IG live was because as usual I’m trying to carry people along on every step. This movement belongs to each and every one of us and no one single person can claim to be the leader of this.

The room we were in where the video leaked was Mr Mba’s. We waited there briefly for the IG to see us. The actual meeting with the IG though recorded has not yet been shared. That was where we discussed extensively the issues facing the youth and facing us as a nation.

I have never claimed to be the voice of the people, nor can I claim to have been personally victim ized by SARS. But as a young Nigerian, there is no way I could be silent on this matter and not help to the best of my ability-as flawed as it may come across to some. The crime here would have been inaction.

I would like to thank the IG for agreeing to meet with us under such short notice and hearing us out, the great Nigerian youth for being so inspiring and showing the world that things are chang ing, and in particular i’d like to thank the REAL voices of this movement-our WOMEN. They have been the backbone of the protests, and we must protect them at all costs.

Lastly, may we never forget those that have tragically lost their lives to police brutality before and during these protests. Yours always, David Adeleke”.

I am Nigerian first before anything .. pic.twitter.com/pypB8PzLk3

KanyiDaily had earlier reported that Nigerian singer, Oxlade was injured during the #EndSARS protest in Surulere, Lagos State. His manager, Ojah B, was arrested, tortured and detained by the Nigerian police.

Davido To Meet IGP Adamu On Monday, Says #EndSARS Protest Is Far From Over