One of the houses of Yoruba activist, Chief Sunday Adeyemo, popularly known as Sunday Igboho, has been razed down by suspected arsonist in Soka, Ibadan, Oyo State.

UPDATE: Sunday Igboho Says Those Who Burnt His Ibadan House Will Run Mad In 48 Hours

It was learnt the incident occurred in the early hours of Tuesday, a few days after the expiration of his 7-days ultimatum issued to the Fulani to leave Igangan community of Ibarapa LGA.

The source of the fire was unknown as of the time of filing this report, but it was gathered that fire fighters from the Oyo State Fire Service arrived the scene a few hours after to douse the fire.

No one was reported injured during the attack because Igboho, who was living the house, had already moved to a new house he built in Ibadan.

Igboho, who is the Akoni Oodua of Yoruba land, had made headlines recently after he asked Fulani people in Ibarapa Local Government Area of Oyo State to leave within seven days.

At the expiration of the ultimatum last week, the house belonging to the Seriki Fulani of Oyo State, Alhaji Saliu Abdulkadir, was set on fire by aggrieved youths in Igangan community. 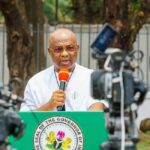