Former Deputy of the Indigenous People Of Biafra (IPOB), Mazi Uche Mefor has accused his ex boss, Mazi Nnamdi Kanu, of being behind the unknown gunmen causing insecurity the South East. 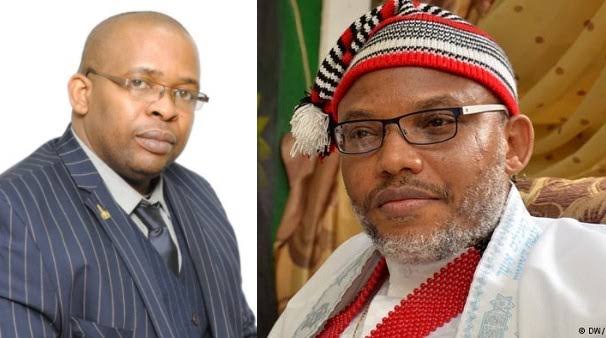 Mefor made the accusation in a statement on Friday while reacting to the death of “Biafra youths” killed by the Nigerian troops while they were on a mission to attack a police station in Imo State last Thursday.

The IPOB Ex-deputy maintained that the issue of security is not a one-man, unilateral show but a collaborative and collective endeavour.

He accused Nnamdi Kanu of trying to be an emperor and that is why he refused to consult adequately with major stakeholders in the South East.

Mefor lamented that his former boss was pushing Biafra youths towards their death by encouraging violence instead of planning strategic response.

“A devastatingly sad situation. May the souls these valiant, gallant Biafran youths continue to rest in peace,” the statement reads.

“A seriously flawed strategy that lacks dept, tact and finesse, we repeat. Mazi Nnamdi Kanu, you lied against many of us, called us traitors, mobilised your anarchic IPOB zealots to blackmail and defame us and many others for advising you against taking avoidable perilous, and suicidal mission like this. Why are you hiding the casualties? ”

“We maintain that the issue of security is not a one-man, unilateral show but a collaborative and collective endeavour.”

“You want to be an emperor and that is why you refused to consult adequately with important stakeholders. But you should have been reminded that Biafraland is not an empire.”

“We ask this questions again: who are the victims and casualties of this avoidable self-inflicted, self-destructive, violent campaign of threat, horror , violence and vendetta? Why wilfully making Biafraland a theatre of war/battlefield and that of hostilities?”

“The effect of this fundamentally jaundiced strategy is that Biafraland is likely to be heavily militarised and militantised at the expense of monumental loss of lives of our youths, economic strangulation and potential, indeterminate humanitarian crisis while other parts of Nigeria will remain peaceful due to absence of effective strategy.”

KanyiDaily recalls that the IPOB had denied being responsible for the series of attacks on security agents and police station in South-East region.