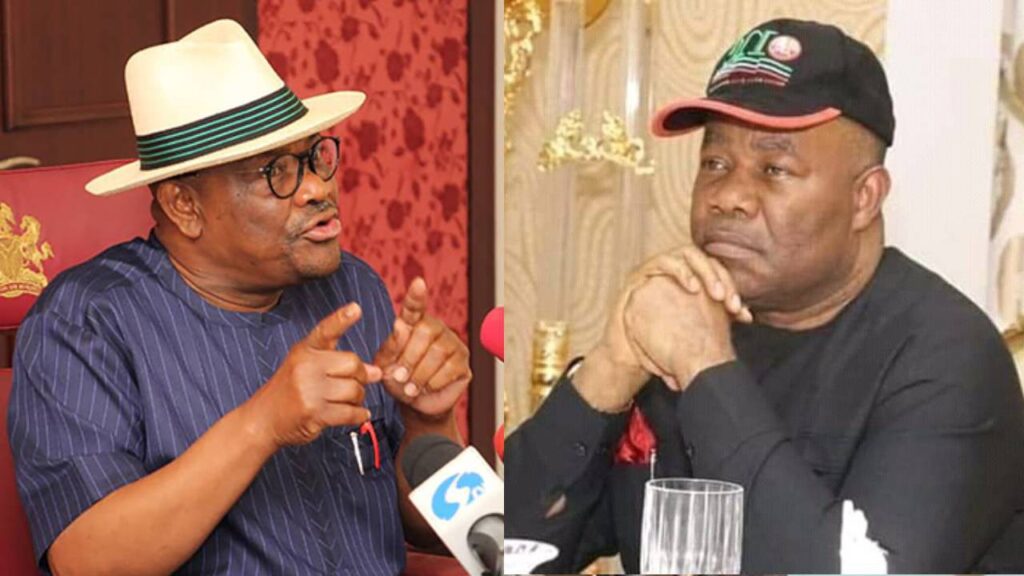 Rivers State Governor, Nyesom Wike has accused the Minister of Niger Delta Affairs, Godswill Akpabio, of reneging on his pledge to contribute to the construction of the road leading to the Headquarters of the Niger Delta Development Commission (NCDC) along the Eastern By-pass axis in Port Harcourt.

He revealed that there was an agreement between his government, the NDDC, and the Niger Delta Affairs on how to contribute to the construction of the road,

Wike threatened to bar Akpabio and other NDDC officials from using the road leading to their new state headquarters if the commission fails to pay its counterpart funding meant for the construction of the road.

“I want to first report that there is no collaboration that we have had with the NDDC that they have completed one. The mother and child hospital we were supposed to have collaborated with the NDDC we brought our own part of the money, NDDC didn’t bring a dime.

“As I speak, you have not brought one naira, meanwhile, the road is almost 35 per cent ready. If you don’t pay, I’ll make sure you do not use that road to your headquarters. Because, yes, I’m not a Father Christmas,” Wike said.

Wike also accused the NDDC of politicizing its activities including the appointment of officers and execution of projects. He challenged Akpabio to ensure that the Commission stops being a cash cow for politicians.

KanyiDaily recalls that Godswill Akpabio had revealed that the NDDC is broke and needs better funding to carry out its duties.

READ:  "The Only Way Nigeria Can Change Is For Everybody To Be Killed" - Amaechi In Audio Leak