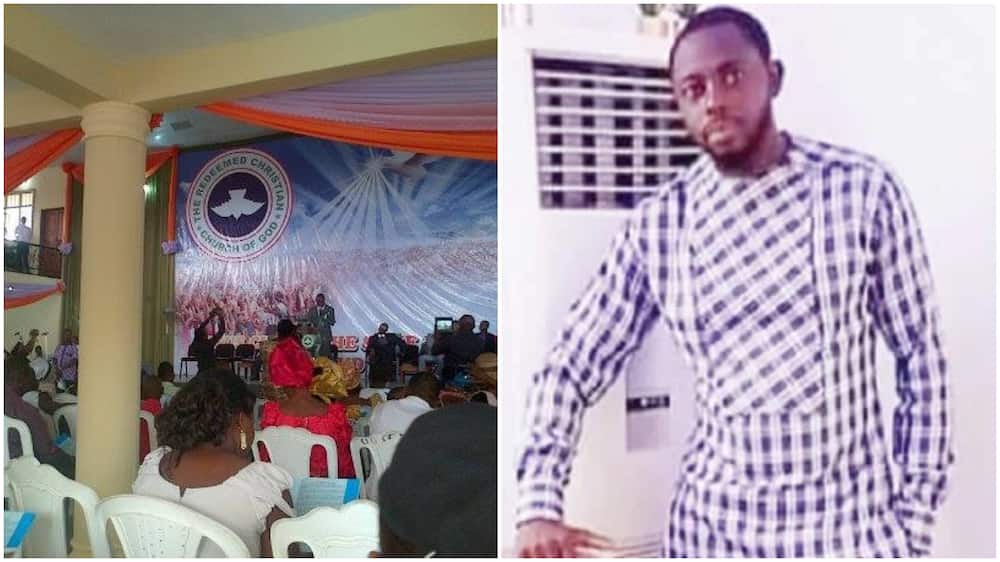 It was gathered that Pastor Babatunde Dada was stabbed to death on Thursday, December 2, by two new converts who came to the church for the first time.

According to Punch, the two young men had visited the church a Sunday before the incident, and they were said to have come out during an altar call to surrender their lives to Jesus Christ.

After the Sunday service, the church accommodated the new converts on its premises after they claimed to be stranded and have no place to lay down.

They had barely spent a week in the church when they reportedly stabbed the cleric to death and collected money from him inside the RCCG Chapel of Resurrection on 13 Road, 6th Avenue, FESTAC Town.

READ:  Imo Governor-Elect Has No Powers Yet To Issue Directives To Banks – Okorocha Warns Ihedioha

Speaking with newsmen, the pastor’s wife, Bose said that she called her husband on the day of the incident and he promised to come home to rest.

She said, “My husband was killed on December 2 at the church. He was the admin/accounts officer, as well as the parish pastor. I was not with him when he was killed, but I was told that they collected money from him. I heard that those who killed him were new converts.”

A family member, who is also a security expert, Mr Abolarinwa Olatunbosun, told our correspondent on Wednesday that the pastor was killed after withdrawing money from a bank.

He said, “The pastor went to a bank to withdraw some money and went to rest on the first floor of the church. Two persons said to be new converts went to meet him upstairs, broke his head and killed him.

“The matter was reported to the police and one of the suspects, who ran to Ilorin, has been arrested.”

READ:  22-Year-Old Musician Remanded In Prison For Stealing Half Bag Of Rice In Abuja

Olatunbosun said the killing might be for ritual purposes, adding that the assailants were suspected Internet fraudsters, aka Yahoo boys.

The expert said criminals were beginning to attack churches and pastors because they believed there was money in church.

He advised religious centres to be security conscious and put in place strategies that could stop criminals from killing, kidnapping and robbing leaders and worshippers.

A friend of the slain pastor, Fred Enemigin, who is the founder, Highflyers International, Lagos, said in a Facebook post that the pastor was stabbed multiple times.

He wrote, “Two boys had come to church last Sunday and they responded to the altar call by giving their lives to Christ. After church service, they waited to see the head pastor and told him that they were stranded without any place to stay.

“On compassionate grounds, the pastor allowed them to stay somewhere within the church premises pending when they would be resettled. Pastor Tunde Dada, who had for almost a decade been the accountant of RCCG Chapel of Resurrection Parish, was assigned to provide needed welfare for the boys until their matter would be sorted.

“On the fateful Thursday, Tunde was seated in his office and the boys targeting that they were alone on the church premises with him, entered his office and attacked him with knives and other sharp weapons. He was stabbed multiple times and places until they had him killed right there on the spot.

“Our minds are still searching for what the rift between the boys and Tunde was considering the fact that the Tunde we knew was a very gentle soul. Could they have asked for more welfare than what was approved for them and Tunde declined? What on earth would warrant this brutal killing by those who were recipients of a server of the church’s benevolence? There are many more questions that we have not found answers to.”

When contacted, the state Police Public Relations Officer, Adekunle Ajisebutu, said he had yet to be briefed about the case.

READ:  Amputee Hawker Reveals Why She Lied About Her Father’s Death To Get Donations From Nigerians