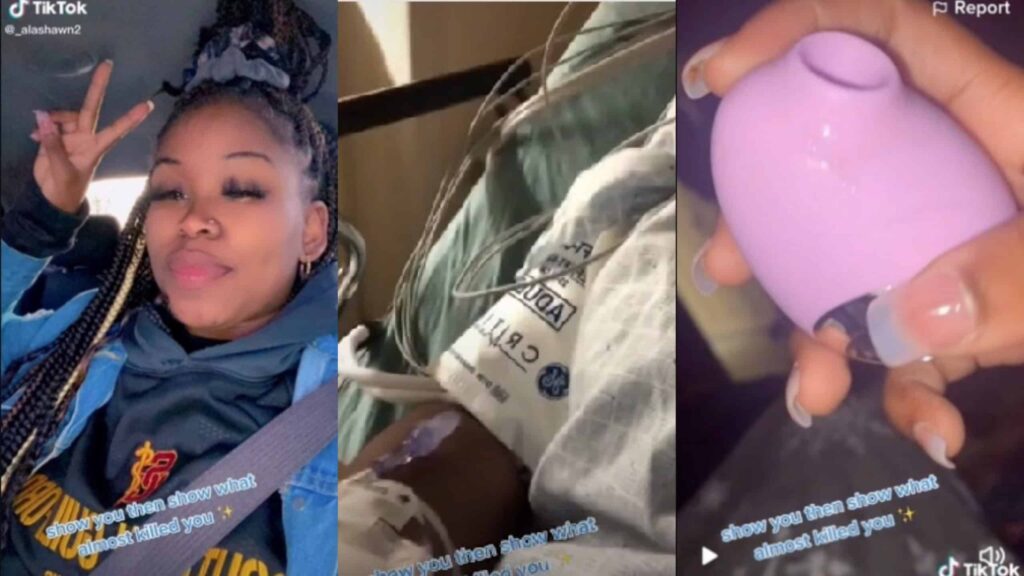 In a video shared on her TikTok page, the officer who claims to have been stationed away from home for almost a year, was seen lying in a hospital bed as she narrated how “the thing almost killed her”.

she explained: “So basically I am in the military, I’ve been away from home for almost a year. So for me being away from home mean I’ve got to make it do what to do, which is why I bought that toy.”

“The toy got like 10 different settings on it so the first couple of things I use them like a lot of times so one day I just decided to just crack this whole what right quick.

“I shouldn’t do that because level one, level two, it’d be sending me to heaven every single time. I cranked that thing up to level six – it’s a different vibration with little suction things.”

She said the sex toy sent her to “heaven” within three to five seconds.

She added: “I’m in heaven and suddenly I realise I can’t get it out of me. I try pull the toy out and it wouldn’t come out – the suction cup was not moving.”

“I couldn’t get myself up because my body is so weak that I’m on the floor. Next thing I know, I blacked out.”

She was taken to the hospital where the sεx toy was removed from her body.

The TikToker confessed: “When I came back, I threw that s*** away.”

KanyiDaily recalls that Jada Pinkett Smith had confessed that sex toys are the main factor that helped her successful 25-year-old marriage to Will Smith.

Related Topics:ArmygistMETRONewsSex ToySoldier
Up Next