Justin Dean, the American husband of Nigerian dancer, Korra Obidi, has taken to social media to announce to address the cheating allegation he levelled against his wife after he announced their divorce.

KanyiDaily recalls that Justin Dean had recently revealed why he wants to divorce the mother of two, saying he did his absolute best to make their marriage work.

In a video shared on his social media page, the doctor apologized for calling Korra a chronic cheat, noting that she only cheated once at the beginning of their relationship and he forgave her.

Justin Dean maintained that every other thing he said about Korra during his outburst is true, and the two girls he had with the dancer are his daughters.

The doctor further apologized to the Obidi family for the cheating claim he made, adding that he will always be there for his kids even if he’s not married to Korra.

“The comments I made about Kora Obidi being a chronic cheater were inaccurate, she only cheated in the beginning of the relationship. Every other thing said is true,” he said in the apology video.

Taking to the comment section of LB blog, Justin wrote: “This is my apology to the Obido family about chronic cheating claims @korraobido and @nancyumeh_ and her dad (Papa). All posts about the children not being mine are false.

“June and Athena are my children and I love them. I’ll be there for them everyday, even if I’m not married to Korra,” he added.

Meanwhile, Korra Obidi has broken his silence on the divorce saga with her husband, Justin Dean, saying she would now focus on taking care of herself and her new baby. 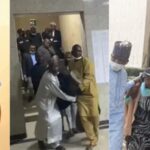