American comedian, Dave Chappelle has been attacked on stage by a 23-year-old man named Isaiah Lee during his performance at the Hollywood Bowl in Los Angeles. 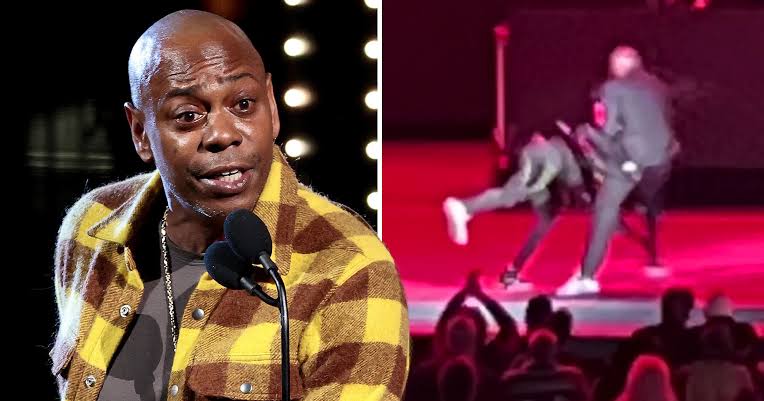 It was gathered that the comedian was performing at the “Netflix Is a Joke festival” on Tuesday, May 3, 2022, when the armed man jumped up from the pit, charged, and tackled Chappelle.

“A man charged and tackled” Chappelle just as the show was ending, according Brianna Sacks, a reporter at the show, with another eyewitness saying the comedian was sent “flying into the air”.

Brianna said the security then ran across the stage and cornered the man, proceeding to kick and punch him while he was on the ground.

She said that the incident sparked “sheer chaos” and that the security team “were beating the attacker up like a free-for-all.”

READ:  "I Once Told My Father That I Will Marry His Age Mate" - Nollywood Actress, Regina Daniels

“Security et al rushed and started punching and kicking the shit out of Chapelle’s attacker. He was just about to bring on Talib Kweli and Mos Def for the encore and we in the crowd were like what the fuck is going on. Chapelle kept on while the guy was getting beat in the back,” she added on Twitter.

Security et al rushed and started punching and kicking the shit out of Chapelle’s attacker. He was just about to bring on Talib Kweli and Mos Def for the encode and we in the crowd were like what the fuck is going on. Chapelle kept on while the guy was getting beat in the back

Chapelle carried on with the show after composing himself, and at one point branded the attacker an “idiot” as he walked over to where he was being beaten up.

The comedian took to the stage and said, “It was a trans man”, a reference to the ongoing controversy surrounding some of his jokes that have been construed as transphobic.

Hollywood actor, Jamie Foxx was among those who ran to the stage to help Chapelle after the incident. Chris Rock, who was slapped by Will Smith at the Oscars, also performed at the show.

Videos circulating on social media appeared to show the attacker, with a badly injured arm, being loaded onto an ambulance.

Just came out of the Hollywood Bowl where a man charged and tackled Dave Chapelle on stage and got his ass kicked by at least 10 people.

LAPD and LAFD are now loading him into an ambulance pic.twitter.com/7SXPe9e8az

Los Angeles Police Department (LAPD) the suspect, Isaiah Lee, was arrested for assault with a deadly weapon in relation to the incident. His bail was set at $30,000 (£24,000).

A journalist for ABC News reported that Mr Lee was “armed with a knife and a fake gun” and that the LAPD confirmed he was arrested with a replica gun that ejects a knife.

It is not known whether Mr Lee attempted to use the weapon when attacking Chappelle who was on the receiving end of heated backlash in 2021 when his Netflix special was dubbed transphobic.

Dave Chappelle was attacked while performing at the Hollywood Bowl tonight

Chris Rock came on stage after and said, “Was that Will Smith?” 😂

Someone just ran on stage and attacked Dave Chappelle 😮 at the Hollywood Bowl in Los Angeles #netflixisajokefest #netflixisajoke pic.twitter.com/0WMUPQ7ks4

Here is a video of the aftermath. #DaveChappelle handled this like a champ! #HollywoodBowl pic.twitter.com/0xaBpWsbrT

Someone attacked Dave Chappelle at his show and his security team left that man looking like Mojo JoJo. pic.twitter.com/pna2642x7G

Chappelle’s experience comes weeks after Will Smith gave Chris Rock a slap on the stage at the 2022 Oscars, for mocking his wife Jada Pinkett’s shaved head. 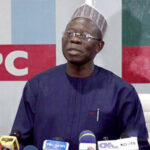