Popular Nigerian singer, Davido has been caught on camera flinging the inner wears of female fans thrown at him during his WRBLO concert in New York, the United States. 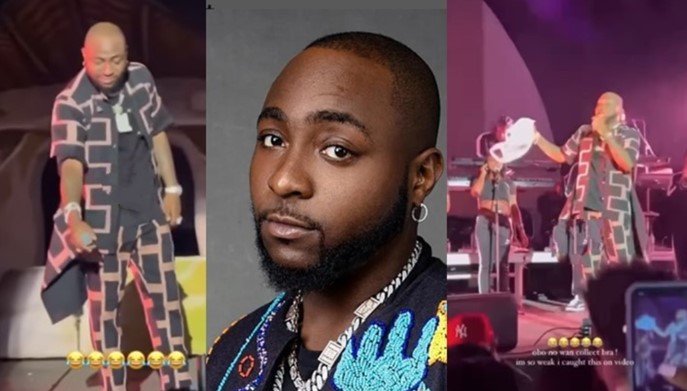 A video circulating on social media shows the moment a lady removed her bra and threw it at the singer while he was thrilling the audience with his songs.

Davido picked up the bra amidst cheers from fans and flung it towards the direction of his hypeman, Special Spesh who was performing on stage with him.

As the singer continued his performance, another female fan dropped her brassiere at his feet, but Davido picked it up as well and flung it for Spesh once again.

His action sparked hilarious reactions, especially considering how his colleague, Burna Boy, was very receptive when bra-throwing was done at their shows.

READ:  Cardi B Opens Up On How She Used Sex To Drug Men And Rob Them Of Their Money [Video]

KanyiDaily had also published a video showing the moment some female fans of Burna Boy were seen throwing their bras at him during his historic concert in New York.