The Minister of Information and Culture, Lai Mohammed has revealed that 1,600 ‘repentant’ Boko Haram terrorists have learnt trades in various fields and re-integrated into the society where they are now contributing positively to their environments.

The minister disclosed this in London during his engagements with international media houses in the government-sustained oversees image laundering.

He said that contrary to media reports that the regime had been successful in stemming the tide of insurgency in Nigeria, the News Agency of Nigeria (NAN) reports.

Mohammed told the media houses that the regime would leave no stone unturned to tackle the worsening insecurity.

“The success of our gallant military has resulted in about 51,000 insurgents surrendering between January and March this year alone,” claimed the minister. “We have also been able to reintegrate about 1,600 former fighters who had been able to learn one trade or the other.”

READ:  13-Years-Old Girl Who Was Declared Missing, Found Naked In Church Bed With Her Pastor

The minister is in London to engage the media and think-tank on the progress the administration is making in various endeavours.

Speaking on the outcome of his engagements with Reuters, The Economist and Times of London, the minister said issues on security, economy, fighting corruption and power sector took the centre stage.

Mohammed said the Buhari regime had been able to solve the perennial farmers-herdsmen violence.

“Our solutions which can be found in the National Livestock Transformation Plan have ranching at its core. All we are asking for is for states to cooperate more with the federal government to ensure that ranching takes place in their states,” stated the minister.

He added, “Evidence has shown that in the states where ranching has been put in place, have less conflicts than the others.”

READ:  Garba Shehu Apologises For Saying 'Only 10 Students Were Abducted In Katsina School' 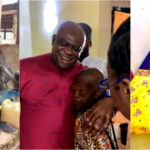