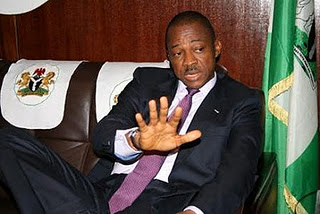 Governor Sullivan Chime of Enugu State has slammed a N2bn libel suit against Media Techniques Limited, publishers of City People magazine over a scandalous story it published last October alleging that the younger sister of his (Governor’s) wife had delivered a baby for him.

The Governor in suit No E/418/2011 filed by his lawyers at the High Court Registry Enugu and dated 16/12/2011 is asking for a declaration that by printing and publication of the article at page 61 of City People of 5th October, 2011 under the heading: “About as South East 1st Lady’s younger sister who delivered baby boy for the Governor”, the defendant is liable to the Plaintiff for libel.

He is also seeking general damages in the sum of N1 Billion Naira and another N1 billion naira as Exemplary/Aggravated damages for libel.

In addition, the governor is also asking for an order compelling the Defendant to retract the publication and tender an apology, “which retraction and apology shall be published in City People in the same manner and given the same prominence as the publication of the libel”, as well as in three national daily newspapers with wide circulation in Nigeria.

He is also demanding the sum of N7.5 million as cost of the action.
The plaintiff in his statement of claim, averred that the words used in the story were intended to refer to “and indeed referred to and were understood to refer to him”.

He added that a substantial number of readers of City People who read the offensive publication remembered the content while a number of his friends, associated and family members told him that they were shocked and scandalized by the contents of the publication.

The Governor further stated that the Defendant knew or ought to have known that the publication was baseless and false and that it was recklessly and maliciously made as a deliberate and calculated act to disparage him as the Defendant, contrary to acceptable standards in the practice of journalism, did not make any attempt to either ascertain the truth of the story contained in the publication “nor did it seek to obtain the plaintiff’s side of the story before rushing to publish same”.

The statement further reads, “The false, malicious and libelous statements published by the Defendant have assassinated the Plaintiff’s character and caused him emotional injury and trauma, which injury and trauma still persist at present in view of the non-interaction of the said defamatory statements by the defendant”.

While confirming the action, a close aide of the Governor said that while he had the highest regards for the Media, the Governor was committed to ensuring that not only should any false publication aimed at unjustly bringing him to public ridicule, go unpunished, but also that the journalism profession was generally practiced within established ethics and standards.