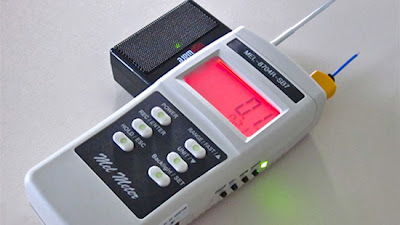 Any parent grieving the death of their child would go to any lengths to hear the
child’s voice one last time. But how many of them would actually invent a device
for it? Electrical Engineer Gary Galka from Connecticut did just that.


After his 17-year-old daughter Melissa died in 2004 in a car accident,
Gary says she began to communicate with the family within days. The doorbell
would ring, TV channels would change and lights would turn on and off on their
own. That’s when Gary realized that his dead daughter had something to tell
them. He created a device to help her, and is now the owner of a thriving
business in paranormal detection devices. Over the years, he has sold thousands
of such devices, ranging between
$79 and $350 in price. Gary has invented over 30 different products that are
meant exclusively for paranormal research.

The Galka family was recently
featured on a Travel Channel TV Program called “Ghost Adventures”. On the show,
the Galkas claim to have made contact with their dead daughter, and to have seen
her as well. They insist Melissa is indeed present around them and the
instruments he invented are proof of it. One of the devices plays out a voice
saying, “Hi Daddy, I love you.”
Also, according to Gary, “when she was sitting on the
bed I felt her lay her head on my chest.” He says he has never seen Melissa, but
his younger daughter Heather has, three times. It has been reported that other
members of the family and even people who aren’t related have seen the girl at
the house.