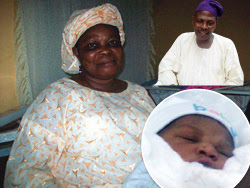 At 52, when some women have already become grandmothers, the case of Mrs. Olukorede Obamo, a teacher in Ogun State, is different.
Olukorode who got married 25 years ago just had her first child last week.
Like other women in that kind of position, she had visited hospitals, herbal centres and countless other places; yet to no avail.
When in February this year, she conceived for the first time, she found it difficult to comprehend her body chemistry…..continue reading
Not able to conceal the development, she told her husband, Moses Obamo, an accountant with Medexia Nigeria Limited, Lagos.
Without wasting time, Moses, took her to a hospital for pregnancy test. At the hospital, it was confirmed that she was indeed pregnant.
In disbelief, they went to other hospitals to reconfirm the result of the test done by the first hospital, and it was positive.
Thereafter, Olukorede started to nurture the pregnancy and nine months, precisely November 13, she was delivered of a baby girl.
Since the news of her birth spread in the neighbourhood, the entire residents turned the home of the Obamos into a Mecca.
When PUNCH Metro visited the Obamos during the baby’s christening last week Wednesday, an army of visitors thronged the venue.
Expectedly, the Obamos threw a lavish party to celebrate the baby who was given more than 20 names, but the most striking of all the names is Obadunsin (It is good to serve God).
During an interview with Olukorede, she said the bundle of joy had stirred up her trust in God and reinforced her belief in spousal love.
She however said she would not forget in a hurry the psychological trauma she went through during the trying times.
Olukorede said, “It was a tough experience; I did not find it easy. I am still in my husband’s house because God is with me.
“We fought times without number but God settled us. My husband relations did not give me a breathing space; they always reminded me they needed a child.
“Curiously, my husband and I went through a series of tests and the results were that nothing was wrong with the two of us.
“At a point, I lost hope. I was in a dilemma as to the next line of action to take. My fear got to a head when I was approaching 50 and my menstrual period became irregular. In the midst of my trouble, some Christian sisters advised me to focus on God and that I should cast my burden upon God alone. Ever since that time, I focused on God more than ever before. I thank God he has given me a child at last. He has removed reproach from me.”
She said she usually carried out her medical check-ups at General Hospital, Ile Epo, Lagos, but she was eventually delivered by a nurse who is a pastor at Christ Apostolic Church in Ota, Ogun State.
“The nurse used herbs for me in addition to prayers,” Olukorede said.
She urged other women in a similar situation not to give up hope, advising them to have absolute confidence in God.
On his part, Moses expressed gratitude to God for wiping tears off their eyes. He said after a year they married without any sign of conception, they started taking drugs.
Ten years after their marriage, coupled with the fact that people had started to call them names, Moses tried his ‘luck’ outside wedlock. This experiment produced two love children – a boy and a girl.
“I was under serious pressure from some of my family members to divorce her. At a point, my people were divided on that because some of them really liked her because she is accommodating and caring.
“But when some people started to say it openly in my presence that I was impotent, I decided to play an ‘away match’ to prove them wrong. In the process I had two children.”
He said one thing that could not be taken away from his wife is her unwavering faith in God, stressing that she participated in all the church activities, particularly the one meant for the expectant mothers.
A gynecologist, Dr. Ekunjimi Olanrewaju, said though it was not a common event, nevertheless, it was not impossible for a woman of Olukorede’s age to give birth to a baby.
Olanrewaju said any woman still seeing her menses could get pregnant irrespective of her age.
He, however, said most Nigerian women entered menopause between the ages of 48 and 52.
“It is possible. There is nothing impossible under the sun. However, it is not a common event. Any woman who is seeing her period, no matter the age, can still get pregnant,” Olanrewaju said.
Punch Nigeria

Mom Killed Son, Set Him On Fire For Failing To Memorise Quran