Abia State’s worst governor T. A. Orji’s gave birth to the devil in his son Chinedu Orji aka IKUKU. Chinedu is so reckless, harasses every Tom Dick and Harry and acts like a God. He calls the shots in the state and his father has no balls to check his excesses, simply because they are partners-in-crime: raping and killing and robbing Abians with impunity!.

Several stories have been written about the boy in the past but I knew one day,the inevitable will happen.. Some months ago, he harassed a military man in mufti in Umuahia. He ordered everyone to leave the supermarket where he came to make purchase but the military man stood his ground. He ordered his men to beat up the soldier but the military man got some soldiers and beat the hell out of the boy. And to think that T A Orji is the worst performing State Governor in Nigeria even makes it more embarrassing.

On saturday, Saturday (Feb. 15), Chinedu Orji, took the exhibition of his criminal behaviors and imbecility to another level.

It was at the official declaration of Gov. Orji’s intention to represent Abia in the Senate come 2015. Venue was the Okpara Square in Umuahia. Before the event was formally commenced, CHINEDU Orji was angered by a comment made by his personal assistant (PA). And so, he ordered his police orderly to shoot his  aide. The policeman obeyed Chinedu’s orders, killing the aide. Pandemonium broke out, and the event was cancelled.

How long does the Orjis’ reign of terror have to continue in Abia while we fold our arms and watch?

Besides why would Chinedu have police orderlies attached to him…What’s his job in the state?

And why would the policeman carry out such orders? The photo when you continue! 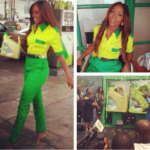