Ebonyi State Governor, David Umahi has lambasted the Indigenous People of Biafra (IPOB) for kicking against the planned visit of President Muhammadu Buhari to the state. 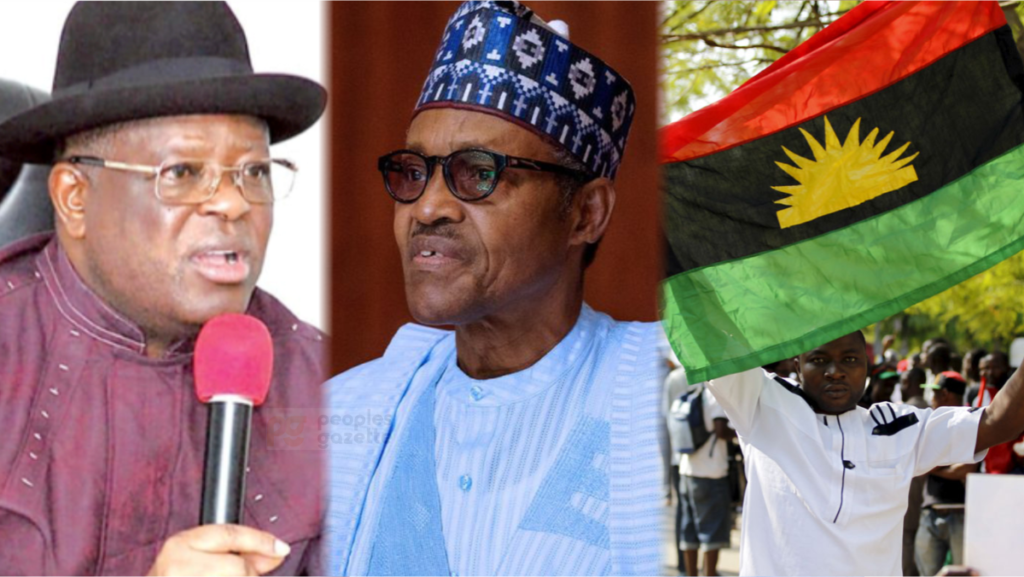 KanyiDaily recalls that IPOB had warned President Buhari not to visit Ebonyi State or any part of the South-East until its leader, Nnamdi Kanu, is released from the detention of the Department of State Services (DSS).

The group threatened to lock down the South-East region, noting that the president would only meet an empty street and hostile welcome if he chooses to visit Ebonyi whether openly or secretly without releasing the IPOB leader.

Reacting to the threat during the state annual Thanksgiving Service at the Government House Chapel in Abakaliki, Umahi described the IPOB’s statement as “rubbish and inconsequential”.

The governor noted that the IPOB lacked both the capacity and warfare prowess to stop the visit which was postponed to next year due to the President’s trip outside the country.

He said, “I saw where one misguided element that calls himself IPOB, said Mr President is not welcomed in Ebonyi. He is inconsequential and I want you to put it on social media.

“I was in Paris and I told Mr President that the leaders of the South-East would want to visit him over the issue of peace in the South-East, and I appeal to him to postpone the visit till early next year.

“But I didn’t want to tell our people because I was urging them to keep pushing our projects as if the President was going to come this year. And I’m not sure up to three or four people knew this; so, I kept it to myself.

“So, Mr President will come when we want him to come. That IPOB guy is an inconsequential human being. If he is serious, let him hit the wall to Ebonyi State and let him see, if he would find feet to go back.

“Somebody will sit down somewhere and be talking rubbish and they will be misguiding our children to go and be killed, but he himself will not be at the war front.

“Any of them that will talk rubbish about security in South-East should come and lead the war. And I will also lead the war for Ebonyi State. And like David, we will always kill Goliath. When they talk rubbish, just ignore them. This land belongs to God.”

KanyiDaily recalls that three months ago, President Buhari visited Imo wearing a full Igbo attire and he was welcomed by some dignitaries, elders, and residents of the state.