The Minister of Niger Delta Affairs, Godswill Akpabio has denied reports alledging that he paid $5 million bribe to the Attorney General and Minister of Justice, Abubakar Malami, to secure the appointment of a Sole Administrator for the Niger Delta Development Commission (NDDC). 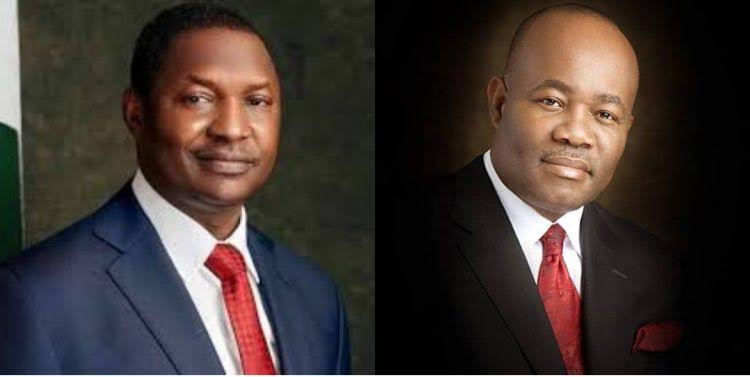 In a statement by issued by his Chief Press Secretary, Anietie Ekong, the Minister insisted that the report was the handiwork of mischief-makers, challenging those behind the report to provide evidence to backup their claim.

Mr Akpabio, who threatened to file a lawsuit over the report, said people who are uncomfortable with the NDDC forensic audit were behind the bribe story.

“Senator Godswill Akpabio said his attention has been drawn to a piece of fake news which claimed that he paid $5 million bribe to the Attorney General and Minister of Justice, Abubakar Malami and others to secure the appointment of a Sole Administrator for the Niger Delta Development Commission (NDDC).

“The Honourable Minister of Niger Delta Affairs stated categorically that ‘this is a piece of malicious concoction manufactured from the pit of hell by mischief-makers. It is a figment of the imagination of the author of the fake news. Senator Akpabio denies the story in its entirety. The authors of the fake news should be ready to back up their claim or face the full wrath of the law.

“The fact is that in a suit number ABJ/CS/617/2020 filed by a Civil Society Organization, Forum for Accountability and Good Governance, at a Federal High Court in Abuja, Justice Ahmed Mohammed had granted an order restraining the Interim Management Committee of the NDDC from performing the functions of the board and accessing the Commission’s offices and files.

“The Order clearly listed the Managing Director Professor Kemebradikumo Pondei, Acting Executive Director of Projects Dr Cairo Ojougboh, Mrs Caroline Nagboh and Cecilia Akintomide as those restrained. The Order also asked that “the most senior civil servant or administrator in the Commission be appointed” to take charge of the Commission.

“It was based on this order that President Muhammadu Buhari approved the elevation of the Acting Executive Director of Finance and Administration, Mr Effiong Akwa, being the most Senior Administrator to take over the headship of the NDDC as an Interim Administrator pending the completion of the Forensic Audit Exercise.

“It is therefore absurd for anyone to even imagine that the Honourable Minister of Niger Delta Affairs, Senator Godswill Akpabio would bribe the Attorney General before an Order of the Court is complied with as the purveyors of the fake news have stated. The general public should discountenance this piece of trash.

“It is obvious that some persons who are scared of the ongoing forensic audit of the NDDC as ordered by President Muhammadu Buhari are working tirelessly to scuttle the exercise by blackmailing the Minister of Niger Delta Affairs, Senator Godswill Akpabio. Their modus operandi is to churn out fake news in a bid to stop Senator Akpabio from sanitizing the NDDC. Otherwise, how can a responsible news website make such a grievous allegation without any shred of evidence to back up its claim.

“However, we wish to state that no amount of sponsored fake news and blackmail would deter Senator Akpabio from doing the right thing as directed by Mr. President. The Minister has the overwhelming support of the impoverished masses of the Niger Delta who have borne the brunt of underdevelopment of the region over the years. “

This is coming months after the EFCC launched an investigation into allegations of corruption and misappropriation of public funds against Godswill Akpabio and the NDDC acting managing director, Prof. Kemebradikumo Pondei.