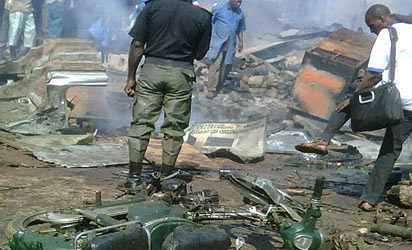 Yesterday, Boko Haram attacked Kano in full force. They bombed an NNPC Mega station, a 16 year old girl blew up herself when she was stopped for search at the gate of Kano trade fair center and a bomb also exploded at the back Kano’s biggest shopping mall Sahad stores and meanwhile on Sunday Boko Haram stormed Cameroon and kidnapped the wife of their deputy Prime Minister. Read president Good-luck’s press release below:

President Goodluck Ebele Jonathan wholeheartedly condemns the recent terrorist attacks in Kano and Adamawa States as well as the kidnap of the Lamido of Kolofata in Northern Cameroon, Lamido Seini Lamine and the wife of the Vice Prime Minister of Cameroon.

The President describes as shocking, callous and reprehensible the multiple bomb blasts that occurred in Kano within 24 hours, and the unrelenting attacks by the Boko Haram at a time the Muslim faithful are observing the holy festival of Eid el Fitri.
He commiserates with the families of all those who lost their loved ones in the Kano and Adamawa attacks and wishes the injured speedy recovery.
President Jonathan further notes that the deployment of young women as suicide bombers represents a new low in the inhuman campaign by these terrorists and an expression of utter disregard for the dignity of the female gender as well as a wicked exploitation of the girl-child.
The President states that the abduction of the Lamido of Kolofata and the wife of the Vice premier of Cameroon clearly underscores the regional security threat that Boko Haram has become.
He welcomes the recent resolve by the Defence Ministers of Nigeria, Cameroon, Chad, Benin and Niger to further strengthen existing partnerships in order to forestall the desperate attempt by misguided elements to turn the sub-region into a battleground for terrorism and radical extremism.
President Jonathan urges the security forces to remain resolute, and not be discouraged by the desperation of the agents of evil.  He believes that with the continued cooperation between Nigeria’s security forces and their counterparts in neighbouring countries, the war against terror will surely be won.
REUBEN ABATI
Special Adviser to the President
(Media & Publicity)
July 28, 2014. 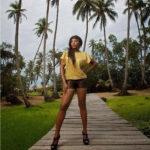 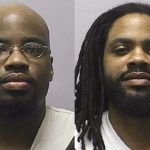