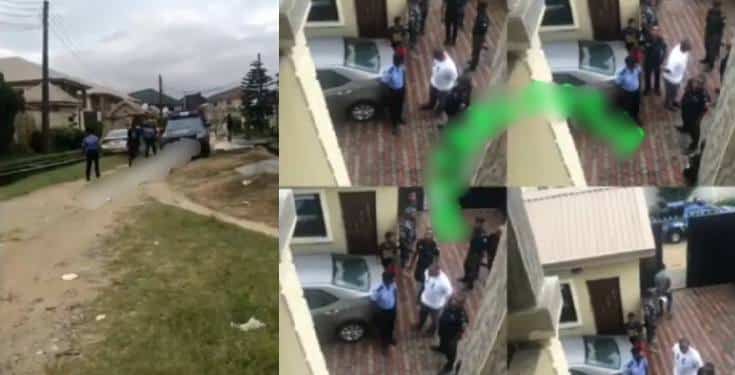 Eniola Adenuga, the son of Nigerian Billionaire Mike Adenuga, created a scene on Friday when he stormed the house of his baby mama, Damilola Ogun, to forcefully take custody of their daughter, Athena.

According to reports, Eniola Adenuga whisked away their daughter from his baby mama with the help of over 25 policemen, who forcefully gained access into the compound at Oke-Ira, Ajah in Lagos State.

Giving an account of what went down, Damilola’s brother revealed that their mom was assaulted, Damilola was tied up and he was handcuffed until Athena was bundled away.

Justice Oyekan Abdullahi, the judge in charge of the custody case, had on the 9th of May, 2019, transferred the case after an NGO, Legal Defence and Assistance Project, accused him of bias for ordering Damilola’s arrest for not producing the child in court.

The legal officer of LEDAP, Adaeze Nkonkelonye, then petitioned the Chief Judge of Lagos, Justice Opeyemi Oke, that Abdullahi did not put into consideration the uncontested magistrate’s court ruling which gave custody to Damilola.

Human rights lawyer and Senior Advocate of Nigeria, Femi Falana, later revealed that Damilola was eventually released and the case transferred from the judge. The Court of Appeal has also served hearing notices on all the parties. According to him:

“The child is still with her based on the ruling of the magistrate which gave her custody.”

However, despite the magistrate’s court ruling, Eniola stormed her house, today, to forcefully take custody of the child.