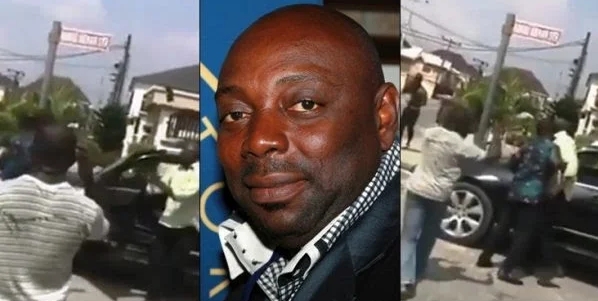 Veteran Nollywood actor, Segun Arinze has been accused of allegedly assaulting his houseboy for using his car without his permission.

The popular actor, in a video shared by a Twitter user identified as @CloakedAdonis, was seen angrily chasing the young man believed to be his houseboy and even attempted to hit him with his car.

Adonis, who shared the video, said Segun Arinze accused the young man of disabling his burglar proof and using his car without permission.

In the video, the man could be seen running away from the angry actor with several bruises on his body, believed to have been inflicted by Segun.

Some witnesses at the scene had to restrain Segun, Segun Arinze could be seen and heard ranting angrily on the street, in order to prevent him from inflicting more pain on the young man.