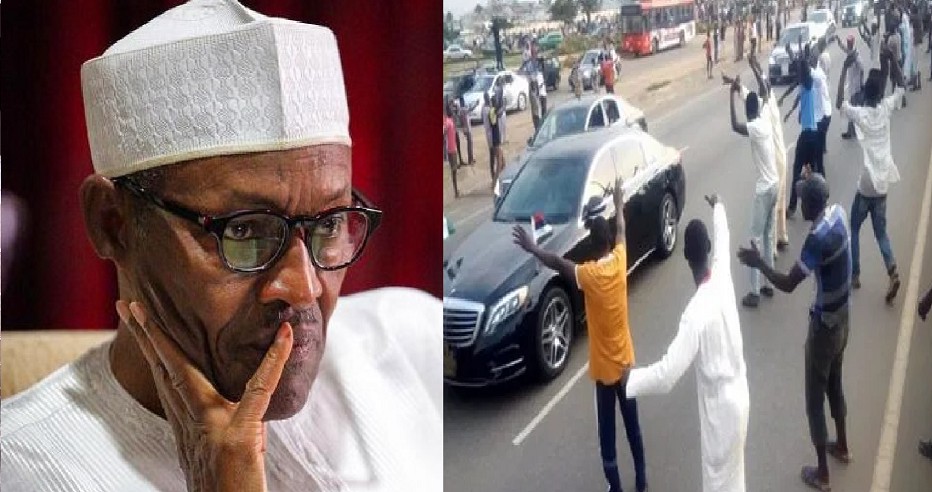 Angry Borno residents, on Wednesday, booed President Muhammadu Buhari when he travelled to Maiduguri to “sympathise” over recent Boko Haram attacks in the state.

A video circulated on social media showed hundreds of protesters including children on the road while the president’s convoy drove past.

The residents were heard shouting in Hausa “Bama so, Bama yi, ka samu a kunya.” Meaning “We don’t want you, we’re not interested because you have disappointed us.”

I witnessed the regrettable incidence. I was at the Airport road & stucked in the jam-packed holdup when he landed. There were not much crowds & all my ears could here was the chanting of the angry crowds yelling "Bama so,Bama so pic.twitter.com/ak7rdEsbQh

Buhari, upon returning from a five-day trip to Ethiopia for an African Union summit, paid a condolence visit to Borno state, following a recent Boko Haram attack in Auno where over 30 travellers were killed by Boko Haram.

KanyiDaily had reported that Boko Haram insurgents killed over 30 civilians and kidnapped many travellers who were stranded outside the military entrance city gate in Auno town, Konduga local government area of Borno state.

READ ALSO
Patience Jonathan All Smiles as She Reunites with Her 'Son', Rotimi Amaechi. Is The Beef Over? (Photo)