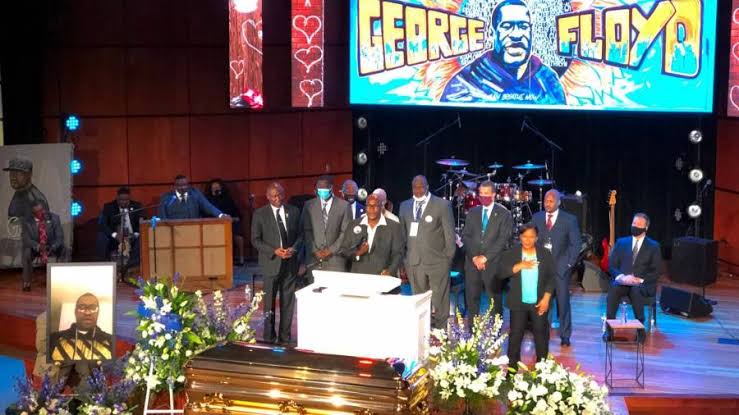 KanyiDaily had published a video that shows how George Floyd died on Monday, May 25, 2020, after Minneapolis police officer, Derek Chauvin, pinned him to the ground by pressing his knee into Floyd’s neck for over eight minutes as the black man repeatedly said, “I can’t breathe.”

Floyd’s death set off nationwide protests with a call for an end to police violence against black citizens and for justice to be duly served to the four former Minneapolis officers involved in killing the 46-year-old man.

Chauvin, who was filmed kneeling on Floyd’s neck, is charged with second-degree murder, accusing him of causing Floyd’s death without intent.

The other three officers involved in his death, Tou Thao, Thomas Lane and J Alexander Kueng have all been charged with aiding and abetting in the crime.

During his memorial service on Thursday, June 4, Floyd, known by those close to him as a “gentle giant,” was remembered as a loving father who made everyone feel welcome in his presence.

The memorial, the first of four scheduled services, took place at North Central University campus, located about two miles from where Floyd lost his life.

The Reverend Jesse Jackson entered and prayed for several moments over Floyd’s golden casket. Others followed his lead, including Minnesota Senator Amy Klobuchar. Jackson and Klobuchar greeted each other and spoke for a few minutes before heading to their seats.

Floyd’s family shared their gratitude for the outpouring of love from the public and marveled at the movement triggered by Floyd’s death.

The deceased brother told personal stories about dancing, playing football, cooking and enjoying life together. They said he was known by the endearing nickname “Big George.”

“George, he was like a general,” brother Philonise Floyd said. “Every day he would walk outside there would be a line of people wanting to greet him…. He was powerful, man. He had a way with words…. Everybody loved George.”

“I wish he was in the presence, in the flesh, to see it, this great unity,” his brother said. “He would stand up for any injustice anywhere.”

His sister said the thing she will miss most about him are his hugs, “because he was this big sweet giant.”

Speaking at the service, Reverend Al Sharpton said now is the time to “deal with accountability in the criminal justice system.”

Sharpton highlighted the national and international protests sparked by Floyd’s death, and acknowledged that some in the United States have turned destructive. Sharpton said the family does not condone violence or looting.

“George Floyd’s story has been the story of black folks because ever since 401 years ago, the reason we could never be who we wanted and dreamed to be is you kept your knee on our neck.

“It’s time for us to stand up in George’s name and say, ‘Get your knee off our necks!’,” Sharpon said.

Al Sharpton delivering a eulogy for the ages. #GeorgeFloydMemorial pic.twitter.com/stlzBvoKJG

At one point, Sharpton asked attendees to stand for eight minutes, 46 seconds, the amount of time ex-officer Derek Chauvin held his knee on Floyd’s neck.

The extended moment of silence left many people in tears, including the attorney for the family, Benjamin Crump. Minnesota leaders were also brought to their knees.

Hollywood actress, Tiffany Haddish and Gwen Carr, the mother of Eric Garner, hugged and also broke down in tears.

This 8 mins and 46 seconds of silence at the #GeorgeFloydMemorial , the time the cop who’s name I won’t even use had his foot on his neck, killing a man who never should have even been close to death is so incredibly haunting & devastating. We MUST change , we simply must pic.twitter.com/6GuAZPkTI4

Kevin Hart, Tiffany Haddish, T.I and his wife, Tiny, Tyrese Gibson, Ludacris, were among the Black artists and entertainers in the audience.

Several musicians and actors have just arrived at the #GeorgeFloydMemorial. They include rappers T.I. (with his wife Tiny) and Ludacris, Tyrese Gibson, Kevin Hart, Tiffany Haddish, Will Packer and Marsai Martin. pic.twitter.com/PWXRWeiAgj

As Floyd’s casket was rolled outside after the two-hour service, supportive demonstrators chanted “We can’t breathe” and “No justice, no peace. Prosecute the police!”

The body of #georgefloyd carried out of today’s memorial. The moment, the scene, unreal. #GeorgeFloydMemorial pic.twitter.com/Xet7rfwD1x

"The mind of a child is where the revolution begins"
– @ImmortalTech: Caught in a hustle#GeorgeFloydMemorial #BlackLivesMatter #NoJusticeNoPeace pic.twitter.com/EeYdg5gP31

Memorial services to honor Floyd are taking place in three cities over six days. After the service, Floyd’s body will be flown to Raeford, North Carolina, where Floyd was born, for a public viewing and private family service on Saturday.

Another public viewing will be held in Houston, Texas, where Floyd grew up and lived much of his life, before a private burial there.

Boxing champion, Floyd Mayweather had offered to pay all the funeral expenses for George Floyd, as well as other expenses that would come up during the memorial services. 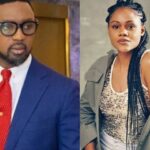