The Minister of Niger Delta Affairs, Godswill Akpabio has finally named some Nigerian lawmakers who allegedly got contracts I from the Niger Delta Development Commission (NDDC). 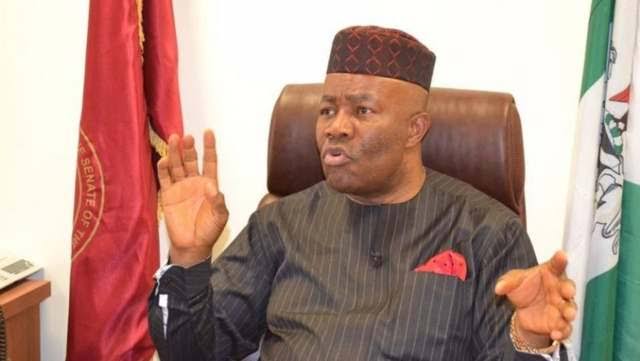 KanyiDaily recalled last week, Akpabio had alleged that over 60 percent of contracts of the NDDC were given out to members of the National Assembly.

The House of Representatives Speaker, Femi Gbajabiamila had given Akpabio a 48-hour ultimatum to identify lawmakers that are NDDC contractors as he alleged during his testimony before the House Committee on NDDC.

However, a few hours after the expiration of the ultimatum, Gbajabiamila had signified that the House would head to court to seek the prosecution of the minister for criminal defamation.

The minister later retracted his claims in a letter addressed to the Speaker, saying his reference was not to current lawmakers of the ninth assembly.

However, it was learnt at the weekend, Akpabio issued a letter containing the names of four senators who received 74 contracts from the NCDC between 2017 to date.

Akpabio did not state if the lawmakers were directly awarded the contracts or they nominated the projects under their Zonal Intervention Projects, also known as constituency projects.

The former Chairman, House of Representatives Committee on the NDDC, Mr Nicholas Mutu, who represents the Bomadi/Patani Federal Constituency of Delta State, is among those linked by the minister with contracts.

The minister, however, did not provide the cost of the projects listed against the lawmakers’ names, while the value of contracts given to non-lawmakers had costs of various projects attached to them.

The document shows that most of the projects were awarded in 2018, a year before the ninth assembly was inaugurated. It is also not clear whether or not they are constituency projects.

It was observed that contracts listed against the names of the lawmakers were not up to 60 percent of the 266 on the list provided by Akpabio.

The document sent by Akpabio also contained a list of projects assigned to non-members of the National Assembly.

A spokesperson for Mr Akpabio, Aniete Ekong, confirmed that the document containing the names was part of those sent by Mr Akpabio to lawmakers investigating the NCDC.

This comes days after the Senate resolved to investigate allegations of corruption levelled by the Niger Delta Development Commission (NCDC) against some lawmakers.

READ:  Leah Sharibu Gives Birth To Baby Boy After Forced Marriage To Boko Haram Commander Who Converted Her To Islam