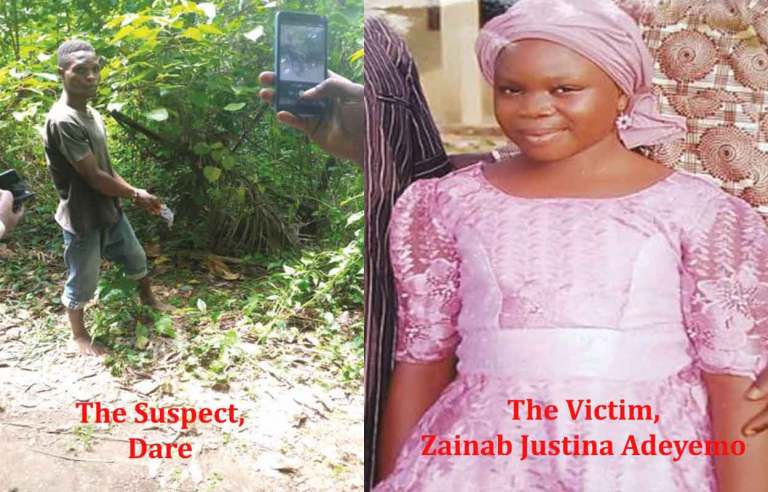 According to Vanguard, the incident happened on Friday July 17th, 2020, when the girl was returning from an errand in a neighbouring village when she boarded Dare’s bike.

Mama Zainab, as she was popularly called, said her daughter left their house around 2pm and took a motorbike to make it easier and quicker for her. Unfortunately, hours after her mother thought she would have come back, she was nowhere to be seen.

The apprehensive mother quickly dashed to the village where her daughter was sent only to be told that she had long gone back after delivering the message. Still hopeful, she rushed back to her village to meet an empty house, no Zainab.

In desperation, she went back to Eshe where she sent her and was told that her daughter joined a popular commercial motorcyclist called Dare while returning home.

The mother was directed to Dare’s house where, to her surprise, Dare denied seeing her. This infuriated other commercial motorcyclists and they attempted lynching Dare.

But later they ended up dragging him to the nearest police station where he admitted that he truly carried the girl with his motorbike and that he dropped her at Iru motor Park.

At this stage, Dare was compelled to show them where he dropped the girl, which he did. He was then taken to the nearest police station.

The agony of Mama Zainab who could not control her emotions at this stage narrated to Vanguard Crime Guard in tears. She continued:

READ:  I’ve Passed That Level Of Being Abducted, Nobody Can Kidnap Me – Governor Akeredolu Boasts

“On getting to the police station, now visibly frightened Dare pleaded that he should be treated gently assuring that the missing girl would eventually be seen.

“Shockingly, he further claimed that while he was on his way from Eshe to Irun with Zainab, they had an accident and the girl was seriously wounded.

“Initially, we told the police to carry out immediate investigation into his claims but they were insisting that we must wait for the stipulated 24 hours before taking any action.

“This infuriated villagers and they went out in search of Zainab without the police. Luckily, after about five hours’ thorough search, the corpse of Zainab was discovered along a footpath in the bush. The police was informed and they later picked it.”

“The delay by the police forced both commercial motorcyclists in the area and villagers to stage a protest demanding that Dare must be brought out to say what happened to the little girl.

“The protest made the police to accost Dare who started narrating how he raped and later killed the little girl. He told gory tales of how he was raping her inside the bush while they were on their way only to discover that she was dead.

“He claimed that Zainab died as result of the struggle that ensued between them during the process and he dumped her body in the bush.”

READ:  Donald Trump Is Mad At American Government For Bringing Ebola Patient To US

Police sources said after his confession, the protesting crowd nearly set the police station ablaze by insisting that Dare must be handed over to them to be killed.

However, the police succeeded in curtailing their moves and later transferred the suspect to the State Criminal Investigations Department in Akure where more investigations will be carried out over the case.

KanyiDaily had also reported how the Nigeria Security and Civil Defence Corps (NSCDC) uncovered a decomposing corpse of a middle-aged woman who was raped to death behind a primary school in Anambra.