President of Cote d’Ivoire, Alassane Ouattara has been re-elected for a third term in office with 94.27% of the votes in election that sparked deadly violence and was boycotted by opposition voters. 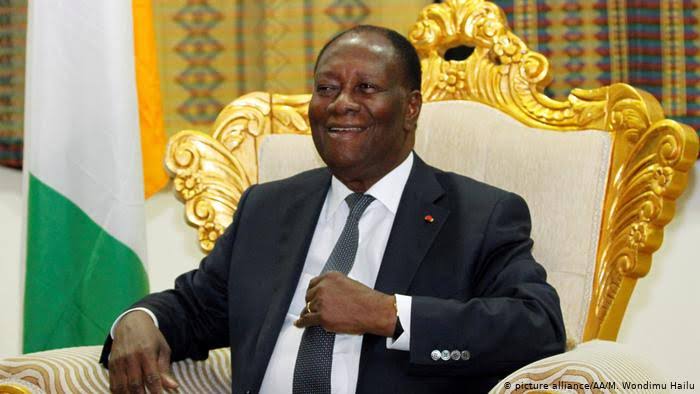 Kuibiert-Coulibaly Ibrahime, head of the electoral commission, who announced the results on Tuesday, said the final turnout for 31 October’s election was at 53.90 percent.

The 78-year-old Incumbent president received over 90 percent in most districts in Saturday’s vote, as much as 99 percent in some of his strongholds.

They each got 1 percent and 2 percent respectively while a fourth candidate, Kouadio Konan Bertin, running as an independent, also got 2 percent.

The opposition said Ouattara’s bid for a third term was illegal as it broke rules on Cote d’Ivoire’s term limits and could likely lead to civil war.

But supporters of the president disagree and say the approval of a new constitution in 2016 means his first term did not count, allowing him to restart his mandate.

Mr. Ouattara, who has been in power since 2011, initially promised he would step down after his second term.

The 78-year-old, however, announced his candidacy in August, a month after the sudden death of his anointed successor, former Prime Minister Amadou Coulibaly.

Cote d’Ivoire’s constitution allows for only two five-year presidential terms, but Ouattara’s Rally of the Republicans party argues a 2016 constitutional amendment has reset the clock.

Disagreement over Ouattara’s right to run for re-election led to clashes in the lead up to the vote, in which at least 30 people died. At least nine people were killed during Saturday’s vote according to reports by AFP.

KanyiDaily had reported how a former Ivorian First Lady, Mrs Simone Gbagbo, was sentenced to 20 years imprisonment for organizing post election violence after her husband, Laurent Gbagbo lost out in the 2010 Presidential elections.