Some bandits have reportedly taken over vast hectares of land belonging to the Nigerian Army in the Kontagora Local Government Area of Niger State. 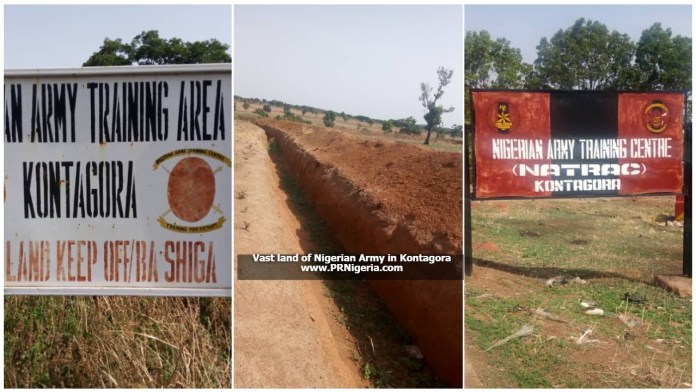 The vast expanse of land is for the Nigerian Army Corps of Artillery (NACA) and the Nigerian Army Training Centre (NATRAC), which are the two military institutions located in the Kongatora Local Government Area.

According to PRNigeria, the bandits have established their camps at Matan Kari, Fagai, Ozowo, Bihima and Kan Libo, among other mountains inside the army land which has been left unused.

It was gathered that the camps built by the bandits are particularly in the mountainous areas, where the gun-wielding bandits first keep their victims before moving them to Kaduna, Zamfara and other Northern states, via forest paths.

The huge land, which starts from the military barracks in Kontagora town, extends to Mai Guge community, in the Mariga Local Government Area.It is almost 40 kilometres in length.

Credible sources said not only banditry, and kidnapping, but illegal mining secretly thrive on the land too.

Though the expansive army land has not been fenced, a deep pit apparently for a foundation has been dug, right after the barracks gate, before entering Kontagora metropolis.

The army, at various points beside the Kontagora-Mariga Road, mounted the signage of their land, indicating ownership. It warned trespassers to keep off.

It was learnt that the Kambaris, were the original owners of the land, but they sold it to the army over 30 years ago. And while the army has yet to start training its personnel, bandits have found the land as their hideouts and somewhere to build their camps and carry out their criminal acts.

Some of the displaced villagers confirmed that bandits had attacked from the axis and crossed the kontagora-Mariga road to attack Usande, Magauta, Dutsen Magaji, and other sparse communities, on the other side of the highway.

“The unfenced and porous army land is the reason bandits have been having a field day invading communities and wreaking havoc, across parts of east of Niger State,

“The bandits’ camps on the army land also served as escape routes for the criminals when other security personnel are mobilised for counter and rescue operations.

“Unfortunately, the army will deny us permission to chase the fleeing criminals. We have, on several occasions, informed the military authorities that their domain is used by bandits for cover, but they refused to cooperate with us, often telling us that the people our intelligence reports indicate as bandits, are actually not,” a community leader, who preferred anonymity, explained.

The Dagachin Fagai in Kontagora, appealed to the government to come to the aid of their long-suffering people.

“The Nigeria army, here in Kontagora too, must prove that they are serious about dealing with the bandits, contrary to claims in some quarters, that they are having sympathy for the blood-thirsty criminals,” he added.

A 63-year-old farmer, Ibrahim Sarkin Zango, whose cattle was recently rustled by bandits at his Farin Gida village, advised the federal government and the military authorities to deploy extra troops to patrol the barrack’s vast land and communities worst hit by banditry.

KanyiDaily had also reported how the Nigerian Army lost about N28 million cash to bandits who ambushed the military logistic convoy in Benue State.