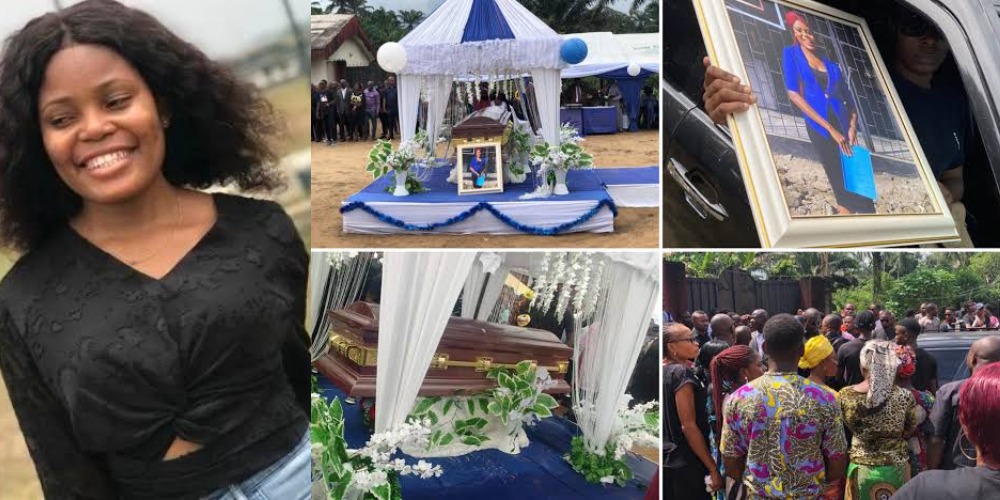 KanyiDaily had reported how Umoren was raped, murdered and buried in a shallow grave by Akpan, who invited her for a job interview in Nung Ikono Obio village in Uruan local government area.

The suspect described as a “serial rapist” has confessed to the killing of Miss Umoren, and is being detained at the police headquarters in Uyo.

The deceased, a graduate of Philosophy from the University of Uyo, was buried on Friday amidst tears from family members, sympathisers and friends, particularly students of Faculty of Arts UNIUYO, who wore black attires, attended the funeral.

Miss Umoren’s burial was conducted by a local congregation of Faith Tabernacle Church Ikot Ibritam District Oruk Anam after the lying in state at her father’s compound.

“It is written that a man will die but woe unto him that caused the death,” was the title of the pastor’s message at the funeral.

“Every man would die someday but what follows after death should be important for everyone,” the pastor said to a crowd of sympathizers, who graced the funeral despite the heavy rainfall.

Brother of the deceased, Mr. Ukeme Ephraim Umoren, appreciated members of the community, relatives and friends for coming from far and near to mourn with them.

He also commended the state government and security agencies for the support offered to the family in their moment of grief.

READ:  “If I Can’t Have It, No One Can" - Woman Says As She Cuts Off Cheating Ex-Boyfriend’s Penis

He urged the people of Oruk Anam LGA and the student community to remain law abiding even as relevant government authorities were working to ensure the deceased got justice.

Idem, who is Deputy Chairman of House Committee on Communications, allayed fears that the matter would be swept under the carpet.

See some photos and videos from the funeral below:

INIUBONG UMOREN, as you are laid to Rest today, May your soul find rest in the Bosoms of ABRAHAM

Rest on Iniubong Umoren 😭
She is no more.😭😭😭#JusticeForHinyUmoren#AkwaIbomTwitter#shedibalabalachallenge
Governors pic.twitter.com/4Cjpfj3UkY

She was the last of four Children. Pictured: Ini’s two grieving sisters. pic.twitter.com/3HLCq2w0Ia

Sleep well Iniubong Umoren. May your killers and everyone connected to your untimely death never know peace.

Iniubong Umoren has been laid to rest. May her soul rest in peace 💔💔💔#JusticeForHinyUmoren pic.twitter.com/7gei2fqrLi

KanyiDaiky recalls that earlier Umoren’s killer, Uduak Frank Akpan, was alleged to have committed suicide in police detention using his trousers to hang himself from one of the metal frame of his cell door.