The Indigenous People of Biafra (IPOB) has accused Justice Binta Nyako of carrying out Fulani’s bidding to jail its leader, Nnamdi Kanu. 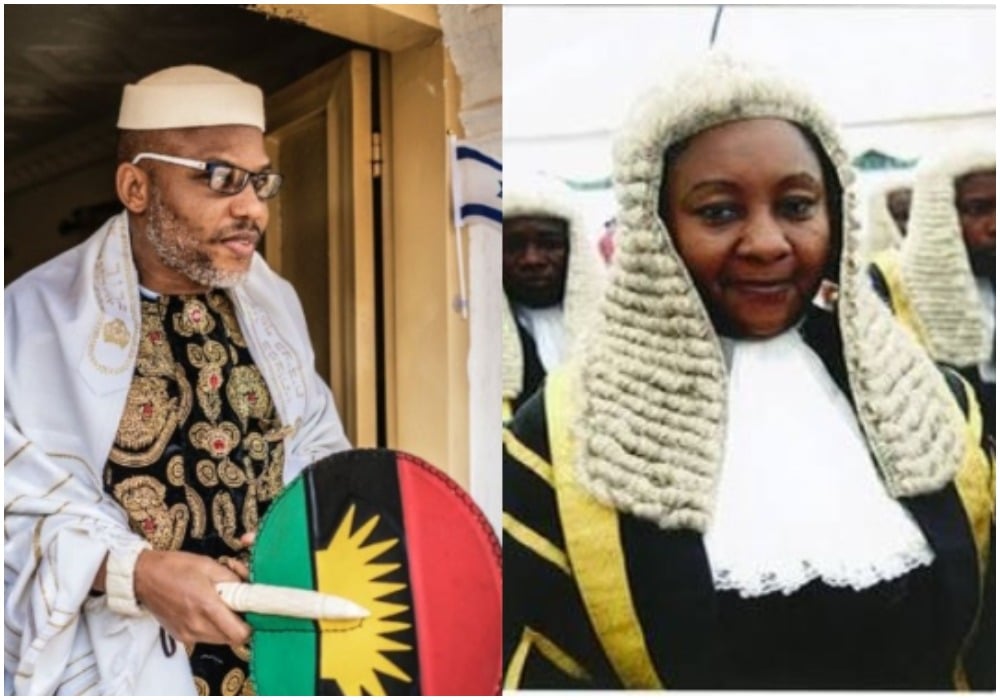 KanyiDaily had earlier reported that Nnamdi Kanu was arraigned before the Federal High Court in Abuja on Thursday, October 21, on a seven-count amended charge bordering on incitement, treasonable felony and terrorism.

During the trial before Justice Binta Nyako, the IPOB leader pleaded not guilty to the amended charges preferred against him by the federal government.

His lead counsel, Ifeanyi Ejiofor challenged his detention and sought that he should be moved from the DSS custody to Kuje Correctional Service Centre in Abuja.

But Justice Binta Nyako rejected the application, insisting that the IPOB leader should be left in DSS custody for security reasons. This is the second the judge turned down Kanu’s request to be transferred to Kuje prison.

READ:  Atiku Tells Buhari To Stop Blaming The Nigerian System For His Failure To Fight Corruption

Reacting in a statement by its spokesman, Emma Powerful, IPOB accused Justice Nyako of doing the bidding of Fulanis by keeping their leader in DSS custody.

Powerful stressed that the ruling was a “foul play”, adding that the judge’s decision was “purely” against the fundamental human right of the group leader.

IPOB said: “It is a foul play by the Fulani judge. Binta Nyako is perfecting Fulani bidding to jail Nnamdi Kanu, but that cannot happen. This is the second time our team of lawyers have demanded that Kanu be transferred to Kuje prison, but this woman rejected the demand.

“It is foul play, and we don’t think that Binta Nyako will deliver justice to our leader, Mazi Nnamdi Kanu; we are letting the world know that Kanu committed no crime by demanding freedom for his people.

“Boko Haram, Bandits and Fulani murderous herdsmen are doing what they feel will be good for their people. We don’t know why Binta Nyako refused to transfer our great leader to prison; this is purely against his fundamental rights.”

On his part, Aloy Ejimakor, Special counsel to Kanu, lamented that the Nigerian Government prefers to have Kanu locked up while bandits, armed Fulani herders, and terrorists are ravaging the country.

Ejimakor said transferring Kanu from DSS custody to Kuje Correctional Centre should not be the issue but granting him freedom.

He said, “The judge cited security considerations as a reason for rejecting the application. She said security situations would not warrant Kanu to be transferred from DSS to Kuje prison.

“As a lawyer, such agitations are almost never refused, but in my time as Kanu’s counsel, I have witnessed a certain trajectory of Government’s policies towards suppressing political opinion leaders. But Kanu’s case is almost always treated differently from every other Nigerian.

“He shouldn’t be in detention but he was renditioned; he shouldn’t have been arrested. If you ask me, he shouldn’t be switching places with the terrorists, herdsmen militants, and bandits ravaging Northern Nigeria and the Southern part of the country. Kanu should be set free. So, when we look at issues like that and leave them aside to start over-flogging issues of transferring him from administrative detention to correctional facility, then it’s an act of chasing shadows.

“Even in 2016, Kanu shouldn’t have been arrested, and in my opinion as a lawyer, those breaching the law of the nation to the extent of being arrested, tried in court, convicted, sentenced and imprisoned are those that are left to roam free; they are negotiating ransom openly with governors in the North, brandishing weapons in the North, while weaponless and unarmed Kanu who is courageous enough to express his political opinion that the Government of the day has decided to suppress using some sort of punishment, is locked up. This is the issue and part of the agitation in the Southern part of the country. Now it’s no longer Southeast, South-South, but we are also talking about Southwest. When is this going to stop?”

KanyiDaily had earlier reported how security operatives watched as thus beat up a human rights activist, Omoyele Sowore, during the trial of Nnamdi Kanu.