American actor and comedian, Bill Cosby has been found guilty of sexually abusing a 16-year-old girl at the Playboy Mansion in 1975. A California jury ruled against the actor in a civil trial brought by a woman who claimed he sexually assaulted her more than four decades ago when she was 16.

In the lawsuit filed in December 2014, the woman identified as Judy Huth claimed that the 84-year-old actor – who was 37 at that time – had forced her to perform a sex act on him at the venue.

She alleged that Cosby invited her to a bedroom, and kissed and groped her without consent. She claimed he grabbed her hand and forced it onto his erect penis.

“He jacked himself off with my hand. Definitely forcefully. It was not what I wanted, at all. I had my eyes closed at that time. I was freaking out,” Huth added.

READ:  Actress Ummi Ibrahim Wants To Commit Suicide Because An Igbo Man Duped Her Of N450M

Cosby, who did not appear in person at the trial, through his lawyers, denied all allegations of sexual misconduct, claiming he did not remember Huth.

But he said the incident could not have happened because he would not have pursued sexual contact at that time with someone who was under 18.

The jury, comprised of eight women and four men, delivered the verdict in favor of Huth, who is now 64, and awarded her $500,000 in damages.

Jurors found that Cosby intentionally caused harmful sexual contact with Huth, that he reasonably believed she was under 18, and that his conduct was driven by unnatural or abnormal sexual interest in a minor.

READ:  "My Boyfriend Must Get My Permission Before We Have Sex" – Ex BBNaija Star, Vandora

The civil trial in California took place eleven months after Cosby was freed from prison when Pennsylvania’s highest court threw out his sexual assault conviction in a different criminal case there.

Cosby, 84, is best known for his role as the lovable husband and father in the 1980s television comedy series “The Cosby Show,” earning him the nickname “America’s Dad.”

But his family-friendly reputation was shattered after more than 50 women accused him of sexual assaults over nearly five decades.

KanyiDaily recalls that American actor and singer, Trey Songz was also accused of “brutal rαpe” by another woman in a fresh $20 million sexual assault case filed against him. 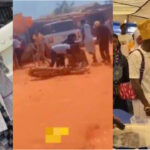