Kogi State Government has confirmed the explosion that claimed some lives during the visit of President Muhammadu Buhari to inaugurate of some projects. 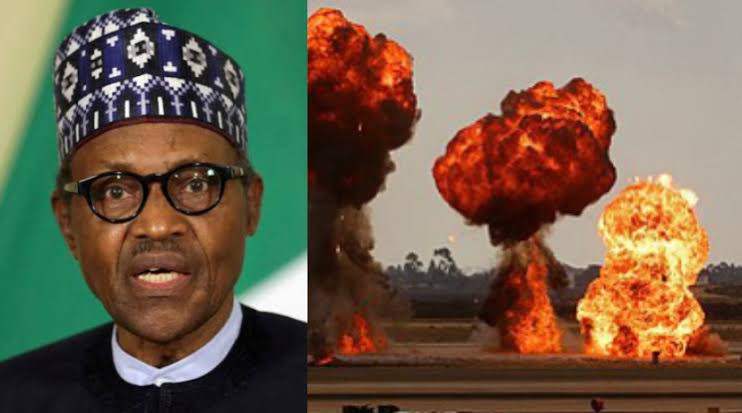 On Thursday morning, an explosion rocked a mosque near the palace of Ado Ibrahim, the paramount ruler of Ebiraland.

Four persons were killed while two others sustained injuries in the blast which occurred when Buhari was in the area to inaugurate projects completed by the state government.

Jerry Omodara, a security adviser to Governor Yahaya Bello who confirmed the incident, said there was prior intelligence of the incident which was why they “had enough deployment of security personnel across the state”.

Omodara also tackled “disgruntled politicians” he accused of celebrating the sad incident which claimed the lives of some residents of the state.

“We had enough deployment of security personnel across the state to be able to frustrate their efforts,” he told the News Agency of Nigeria (NAN) in Lokoja.

“Unfortunately, in spite of that, the enemies of progress still tried to distract President Muhammadu Buhari’s visit to Kogi by setting that explosion.

“All the same, the deployment and tight security around didn’t allow them to achieve their aim.

“This government can authoritatively say that the cause of the blast was solely the act of misguided politicians and people who don’t want anything good for their state.

READ:  Boko Haram Names Media Houses And Their Staff That Will Be The Target Of Their Next Attacks. Check Them Out

“We are aware of some disgruntled politicians celebrating the sad incident that happened today in Okene, where some innocent people lost their lives.

“As a government, we believe that issues of security must concern everyone, and until we all put our hands on deck, it will affect us in one way or the other.

“The people who died today are some persons’ children, brothers or relations, so it must concern all of us.

“But for some politicians to celebrate the blast is very unfortunate and not the kind of politics that can move us forward in this state and the nation as a whole.

READ:  My Road to ‘Orange Is the New Black’ - Uzoamaka Aduba

“Let it be a sound of warning to the disgruntled politicians that Kogi will continue to be on top in area of security in this country as far as Bello’s administration is concerned.

“His (Bello) interest is to have peace in Kogi and nothing can distract him from that. We are suspecting the man that perished in the car as the one who brought the bomb or explosive to disrupt the programme for today.

“Already samples have been taken both human and vehicle parts, and the police and other security agencies investigating the incident will determine what exactly happened.

“The police and other security agencies will definitely come up with their reports for the public to know. We are not resting on our oars until the culprits are caught and brought to book.

“As a government, we sympathise and condole those families that lost their loved ones to the explosion of today, Thursday.”

Pele, A Legend Not Only To Lovers Of Football But All Of Humanity – Atiku Mourns