The Indigenous People of Biafra (IPOB) has distanced itself from the recent attacks on political rallies and facilities belonging to the Independent National Electoral Commission (INEC) in the South East region. 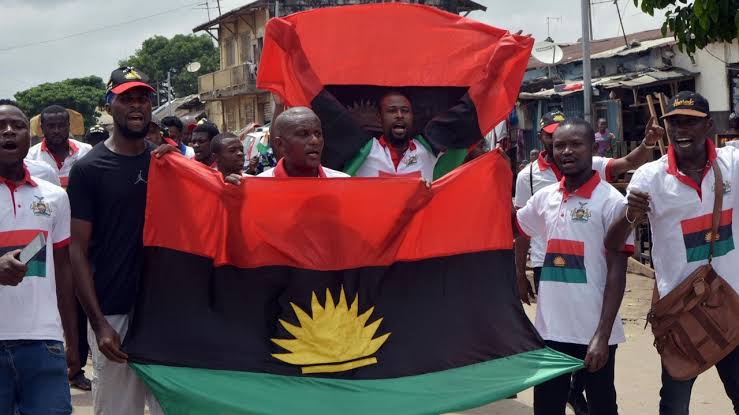 As the 2023 general elections approach, several INEC offices have been burnt by persons alleged to be members of the secessionist group.

Reacting in a statement by its spokesperson, Emma Powerful, the IPOB said the allegations were meant to disparage and blackmail the group.

He also dismissed claims that IPOB was responsible for attacks on political rallies, stressing that the heinous activities was political moves aimed at ruining Peter Obi’s chances in the 2023 presidential election.

Powerful also denied allegations about the purported bomb factory owned by the group and killing of politicians in the South East.

He alleged that the security agents are being used by politicians to assassinate their opponents and turn back to accuse IPOB of being responsible for such heinous crimes.

The IPOB spokesman said it is not distracted by many lies and blackmail allegedly being perpetrated by the Nigerian government and its security agencies against it.

The statement reads, “Following the numerous sponsored criminal activities of the enemies of Mazi Nnamdi Kanu and IPoB restoration movement to smear our reputation, we, the global family and movement of the Indigenous People of Biafra, IPOB, under the leadership of Mazi Nnamdi Kanu, once again ask the public to ignore the concocted lies associating IPOB with many criminal activities being levelled against us by the Nigerian federal government and its security agencies.

“The claim by the Nigerian federal government and its security agencies that IPOB is involved in the burning of INEC facilities, owning a bomb factory, and destruction of electoral party paraphernalia in Biafraland, are all aimed at our image.

READ:  Nnamdi Kanu free as Appeal court discharge and acquits him, strikes out case by FG

“It is an obvious fact that the Nigerian government and its compromised security agencies are working with the criminals to blackmail IPoB because we have refused to give up on the Biafra restoration agitation. They set INEC offices on fire and turn around to claim it is ESN.

“They assassinate politicians, opponents and medical practitioners and turn around to claim it was IPOB just to damage our hallowed name, but we refuse to be distracted. We have uncovered their plan to rig the elections in the southeast against Peter Obi and blame it on IPOB and ESN.

“That was the same way they burnt markets and different properties of our people and tagged it on IPoB. They declared a 5-day ignored sit-at-home and killed our people and even killed a pregnant mother using IPOB and ESN name.

All these activities were sponsored by Fulani terrorists and that’s why there haven’t been any arrest or prosecution of the perpetrators. They target to blackmail IPOB locally and internationally. These criminals were groomed to ensure they demonise IPOB and ESN.

We are also not responsible for any attacks on their political rallies or destruction of political paraphernalia. These criminals and cultists recruited by the Federal Government and its compromised security agencies have caused a lot of harm to our people and our land. We promise that they will regret their actions in due time.

As the 2023 election is fast approaching, anybody or group attacking political campaigns or destroying political materials in Biafraland should not be associated with IPOB. Those persons should be treated as common criminals,” he said.

KanyiDaily recalls that police recently accused IPOB of being behind the recent attack on INEC office in Imo State.