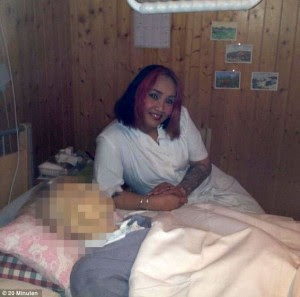 A “nurse” is being investigated after posting pictures on Facebook of herself standing over an apparently dead patient and asking people to guess if she is alive.
The woman, who was dressed in a nurse’s uniform, called herself the ‘soul thief’ and also posted comments including ‘Hail Satan’.
Authorities in St Gallen, Switzerland, about 85km from Zurich, have now launched an investigation and the public prosecutor said they will then decide whether to press charges.
Swiss authorities are now investigating after the woman, dressed as a nurse, posted a picture of an elderly patient and asked Facebook users to guess if she was alive or dead. Pictures posted on her Facebook page include images of her dressed in a rubber nurse uniform in front of whips and chains and one of her standing in front of an ambulance
The woman, who goes by the name Ghostinthedark Satania Blaze on the social network site, put four pictures up of the patient lying in a bed, including close ups of the woman’s face.
In one she is seen leaning on the patient’s pillow and smiling.
When other Facebook users questioned the woman, she wrote: ‘I can put anything I want in my Facebook’.
One user wrote: ‘Why you put on fb a picture like this? Your boss at work know that?’
Another wrote: ‘That’s messed up and sad at the same time.’
But the woman retorted: ‘Death is normal people die all the time!

See The Female Preacher Who Preaches With Her Boobs Out.