A woman who admitted leaving a newborn daughter to freeze to death along a rural roadway in 2004 was sentenced Friday to 50 years in prison.

Katie Stockton, 32, faced up to 60 years in prison for the death of the infant, who became known as Baby Crystal around the Rock River Valley after her frozen remains were found. Winnebago County prosecutors dropped 11 remaining murder charges in exchange for her guilty plea in February to a single count of first-degree murder. Before handing down the sentence, Winnebago County Judge John Truitt allowed testimony about skeletal remains of two other infants found years later in the trunk of Stockton’s car.

Stockton hid her pregnancy and gave birth to the baby in secret on Dec. 17, 2004. Afterward, she stuffed the baby and soiled clothing into an orange shopping bag and placed it along a dead-end road near her parents’ Rockton home.

She was questioned in the baby’s death at the time, but denied she was the mother and refused to provide a DNA sample.

Detectives investigating the death years later collected evidence from a cigarette b*tt they saw Stockton discard, and authorities said saliva on the cigarette b*tt matched blood found on the clothing with Baby Crystal. Stockton was arrested in 2009 after further tests showed she was the baby’s mother with a 99.96 percent certainty.

After her arrest, investigators discovered her car had been sitting in an impound lot for a year and searched it for more clues. That’s when they found the skeletal remains of two other infants wrapped in cloth and stuffed in separate plastic bags and buried beneath a spare tire, chain saw and tire iron.

Forensic pathologists could not determine how the infant girls found in the trunk died or whether they were born alive. No charges have been filed in connection with those remains. 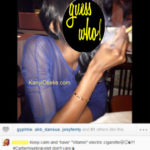