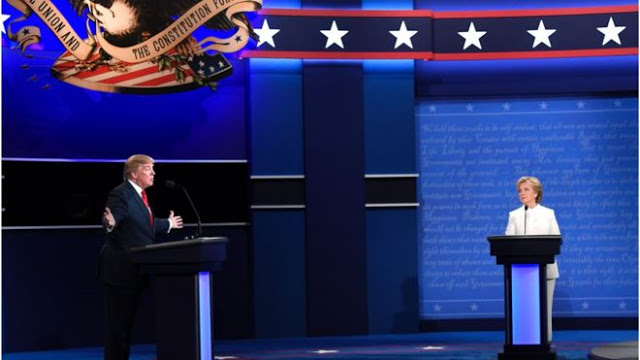 He also refused to say whether he will accept the result of the election, after saying for days it is “rigged”.

Other highlights from the debate at the University of Nevada, Las Vegas, moderated by Fox News presenter Chris Wallace, include:

Clinton says Mr Putin wants Mr Trump elected because he wants a puppet as US president.

“I don’t know Putin. He said nice things about me,” Mr Trump responded

He says he will build a wall on the southern border

“We have some bad hombres and we are going to get them out,” he said

When asked about her paid speech to a Brazilian bank in which she spoke of her dream of open trade and open borders, Mrs Clinton said she was talking about energy policy. 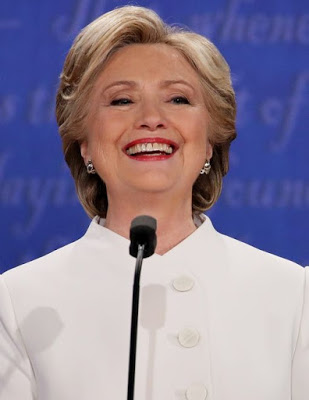 In one key exchange, he attacked her 30 years of “very bad experience” and she responded by going through her timeline, comparing where she was to where Trump was.

While she was in the Situation Room helping to take out Osama Bin Laden, “he was hosting the Celebrity Apprentice”, she said.

Donald Trump tried to be restrained. He really did. During the first section of the third presidential debate, when the topic was the Supreme Court, if you squinted you could almost imagine that this was just another presidential race, with two candidates squaring off and vigorously discussing their public policy positions on abortion and gun control.

Even the immigration discussion started reasonably civilly, until Clinton pivoted to turn a question about WikiLeaks into an attack on Donald Trump’s relationship with Russia and Vladimir Putin.

At that point, interrupting Trump returned. He called Hillary Clinton a liar and after she called him a Russian puppet, he said that was in fact her. By the time the topic turned to “fitness to be president,” the stage was set for a total meltdown. He said the women who has accused him of sexual harassment were in it for the fame and Clinton campaign stooges. 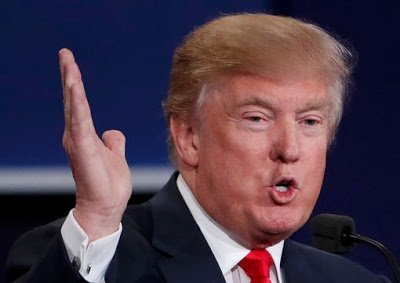 Perhaps most remarkable, however, was when moderator Chris Wallace asked Mr Trump to support the election results, no matter how they came out. He refused to do so. He accused the media of poisoning people’s minds. He said Mrs Clinton shouldn’t have been allowed to run for president. It was Mr Trump in a bunker, settling scores and lashing out at enemies real and perceived.

• Asked if he would accept the results of the election, Mr. Trump — who has repeatedly predicted a “rigged” system could doom him — refused to commit. “I will look at it at the time,” he said, before suggesting without evidence that wide-scale voter fraud and a media conspiracy could affect the outcome. Mrs. Clinton called these remarks “horrifying.” She noted that Mr. Trump had a long history of claiming that forces were aligned against him, recalling his complaint when he did not receive an Emmy award for his television show, among other gripes. “Should have gotten it,” Mr. Trump said.

• The moderator cited estimates that both candidates’ plans would increase the national debt. Mr. Trump rejected that analysis, saying he could “create tremendous jobs” and construct “an economic machine” to power growth. Mrs. Clinton likewise said she would “not add a penny to the national debt.” Asked next about entitlement spending, Mr. Trump switched to a discussion of the Affordable Care Act, which he said he wanted to repeal. When Mrs. Clinton tweaked her opponent for evading taxes, Mr. Trump interjected: “Such a nasty woman,” he said. 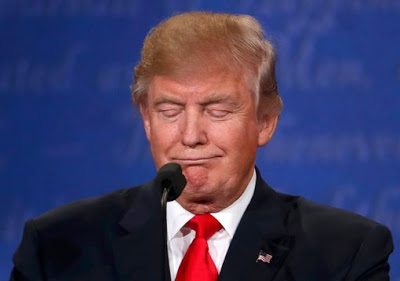 • Mrs. Clinton, speaking about her support for some gun control measures, said she saw “no conflict between saving people’s lives and defending the Second Amendment.” She added that the National Rifle Association was running “millions of dollars of ads against me.” Mr. Trump said he was unsure if Mrs. Clinton had referenced the group’s support for him “in a sarcastic manner,” but that he was “very proud” of it.

• Asked about the role of the Supreme Court, Mrs. Clinton said she expected the court to “represent all of us,” citing the importance of marriage equality and abortion rights. She added that she hoped that “the Senate would do its job and confirm the nominee that President Obama has sent to them.” Mr. Trump, answering the same question, said, “The Supreme Court, that’s what it’s all about,” before suggesting Mrs. Clinton would hope to steer the court away from adherence to the Second Amendment.

• Mrs. Clinton focused attention on Mr. Trump’s past comments that, if abortion were outlawed, there should be “some form of punishment” for the women involved. After Mrs. Clinton was pressed on her support for late-term abortions under certain circumstances — she cited the health of prospective mothers — Mr. Trump said he thought it was “terrible.” “If you go with what Hillary is saying, in the ninth month you can take the baby and rip the baby out of the womb of the mother,” he said.

• Mr. Trump held forth on his signature issue — immigration — suggesting that the heroin crisis in some pockets of the country owed to insufficient border security. “We have to have strong borders,” he said, adding, “We have some bad hombres.” Mrs. Clinton said that while her immigration plan “of course includes border security,” she did not want to see “the deportation force that Donald has talked about.”

• Mrs. Clinton suggested Mr. Trump was a hypocrite on the issue of immigration, saying he had “used undocumented labor to build the Trump Tower.” When the moderator, Chris Wallace, quoted from a paid Clinton speech — citing an excerpt revealed by WikiLeaks in which she said she dreamed of “open trade and open borders” — Mrs. Clinton said she was “talking about energy.” 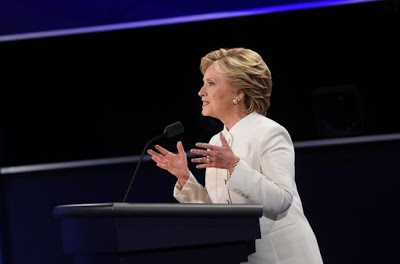 • Mrs. Clinton said a more pressing issue from the leaked documents was the specter of the Russian government engaging in “espionage against Americans,” suggesting that Russian President Vladimir V. Putin has a “clear favorite in this race.” “That was a great pivot off the fact that she wants open borders,” Mr. Trump said, adding, “I don’t know Putin.” Mrs. Clinton said Mr. Putin would prefer “a puppet as president of the United States.” Mr. Trump shot back, “You’re the puppet.”

• After Mr. Trump said Mr. Putin had “outsmarted and outplayed” Mrs. Clinton on the international stage, Mrs. Clinton moved to cast Mr. Trump as too unstable to be president, saying he had been distressingly cavalier about the use of nuclear weapons. “Wrong,” Mr. Trump interjected, reprising an interruption from the first debate.

• As the discussion turned to the economy, Mrs. Clinton said Mr. Trump’s plans amounted to “trickle-down economics on steroids.” Mr. Trump, after taking credit for more active participation from international trade partners — “all the sudden they’re paying,” he said — suggested he would produce national prosperity by renegotiating trade deals.

• After Mrs. Clinton said President Obama did not get the credit he deserved for improving economic conditions since taking office, she allowed that Americans were “standing, but we’re not yet running.” Mr. Trump, placing blame for many Americans’ financial struggles on trade policy under Bill Clinton, said the country was “stagnant.” Mrs. Clinton accused Mr. Trump of crying “crocodile tears” about the American work force despite using Chinese steel on construction projects.

• Addressing the many accusations of sexual assault against him, Mr. Trump said, “I don’t know those people,” calling the accounts “totally false.” “I didn’t even apologize to my wife, who’s sitting right here, because I didn’t do anything,” he said, accusing Mrs. Clinton of stoking the claims. Mrs. Clinton seized on Mr. Trump’s recent insinuations that he could not have assaulted some of the women because they were not attractive enough. “Donald thinks belittling women makes him bigger,” she said. “I don’t think there’s a woman anywhere who doesn’t know what that feels like.” 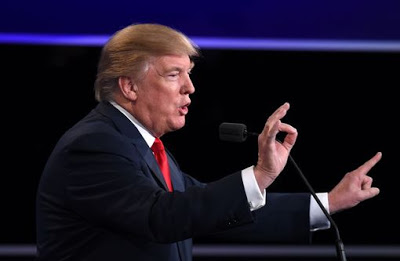 • When Mr. Trump sought to pivot to a discussion of Mrs. Clinton’s use of a private email server when she was secretary of state, Mrs. Clinton accused him of dodging responsibility for his own actions. “He never apologizes or says he’s sorry for anything,” she said, noting his insults of a Gold Star family, a reporter with a physical disability and a judge with Mexican heritage, among others. “It’s not one thing, this is a pattern,” she said.

• Mr. Trump accused Mrs. Clinton of misdeeds at the Clinton Foundation, asking her to return donations from countries with a record of human rights abuses. Mrs. Clinton said she would be “happy to compare what we do with the Trump Foundation,” recalling the use of Trump Foundation funds to purchase a large portrait of its namesake. “Who does that?” she asked. When Mr. Trump said the foundation’s money was dedicated to charitable giving, Mrs. Clinton noted that his claims were impossible to verify because he had not released his tax returns. 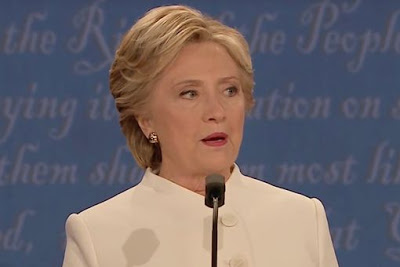 • After Mr. Trump accused Mrs. Clinton of helping to destabilize the Middle East, citing her vote for the Iraq war, among other decisions, Mrs. Clinton reminded voters that Mr. Trump had expressed support for the invasion. “Google, ‘Donald Trump Iraq,’” she said. Mr. Trump repeatedly cut in to say, “Wrong.”

• The candidates sparred over refugee policy, with Mr. Trump predicting security crises if Mrs. Clinton were elected. “This is going to be the great Trojan horse,” Mr. Trump said, discussing Syrian refugees. “Lots of luck, Hillary.” Mrs. Clinton said she would not allow anyone into the country without appropriate vetting but added, “I am not going to slam the door on women and children.” 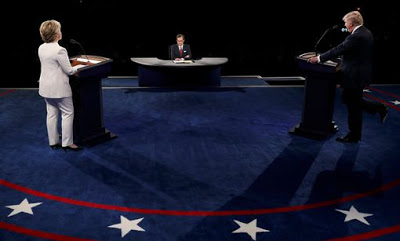 • Offered a chance to give closing remarks, the candidates hewed closely to their campaign trail messages. Mrs. Clinton spoke about improving the lives of families, saying she hoped Americans would “give me a chance to serve as your president.” Mr. Trump began, “She’s raising the money from the people she wants to control. Doesn’t work that way.” He said he would “make America great,” touching on what he called a “depleted military” and urban conditions where “you get shot walking to the store.”

For extensive minute by minute break down, checkout Telegraph and Mirror. 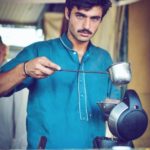 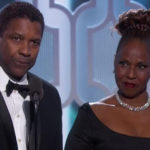