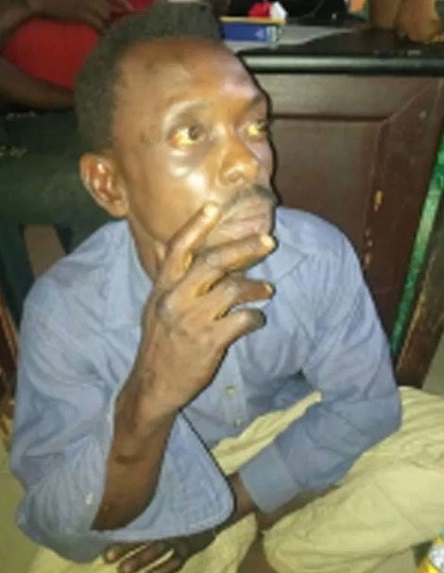 Lagos State Police Command has arrested a 38-year-old man, Daniel Isaac who strangled his landlord at Ijegun area of the state.

The suspect, a plumber at Abule Ado area of the state claimed that a strange spirit came over him and he pounced on his 50-yr-old landlord called Don Able from Rivers state, inside their compound in Ijegun.

He later threw the body of the landlord into an open septic tank in their compound. The suspect was arrested by the police on stop and search at Ibah division with an accomplice, Emmanuel Chukwu, 36, while they were taking the landlord’s car to a buyer.

Giving details of how the incident took place, the suspect said:

“My landlord whom I call Don Able was a very unassuming good man. He is from Rivers state and sells cars. He is not living with his family in the compound. That morning around 7.30pm, I gripped him, overpowered him and strangled him to death. I then threw the body into the open septic tank inside our compound.

“After that, I called Emmanuel Chukwu who was earlier introduced to me as a car dealer. He came and we contacted another man called CY who brought the number plate we fixed in the car, a Toyota Camry, blue in colour, and drove off to look for a buyer. We were arrested at a police check point in Ibah. CY took to his heels when they stopped us but two of us were arrested.”

Giving further details, the suspect told Crime Guard; “I feel so sorry for killing my landlord. He was a good man and very friendly with his tenants.” Narrating further, he said:

“When I held him, we struggled but I overpowered him because that bad spirit in me is very strong. It makes me very powerful. The spirit use to tell me to take my life. It also makes me feel like taking my life. Once, it asked me to set myself on fire and throw myself into the open septic tank inside the compound. It started tormenting me in my village when I was 14 years. It has defied every cure.

“Sometimes, it will turn me into a madman. Its a black, strong, huge figure and it makes fire come from my eyes when it comes upon me. It usually torments me early in the morning or when the sun is at its peak. I attacked my landlord when other tenants had left for work because they normally leave very early in the morning. I am the fourth in a family of seven from Abaobubu in Ekwulobis, Aguata in Anambra state. The police recovered the body of my landlord from the septic tank after the spirit left me at their station while they were questioning me.”