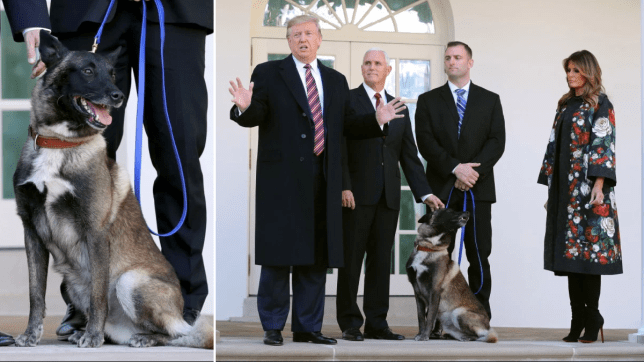 Conan, who was named after comedian Conan O’Brien for her shaggy hair-do, chased al-Baghdadi down a tunnel before he detonated his suicide vest, killing himself and his three young children.

President Trump surprised reporters at the White House rose garden on Monday by honouring Conan, who was wounded during the operation.

During the media event, Trump said that Conan was “very badly hurt” in the raid, with a possibility that the girl would never recover.

“Conan is a tough cookie,” said Trump, noting that she was now fully recovered and would still be serving. “Nobody is going to mess with Conan.”

“The dog is incredible, actually incredible,” Trump said about Conan, a Belgian Malinois. “We spent some good time with it. And, so brilliant. So smart.”

The President said Conan was not retiring and is in “prime time” age-wise.

At one point during the previously unscheduled appearance in front of the press, Trump suggested Conan would turn on reporters who asked questions.

“It’s trained that if you open your mouths, you will be attacked. You want to be very, very careful,” the President said.

Conan, the military working dog, was given a medal for his heroics in capturing the terror leader.

Activist Rescues 11-Year-Old Housemaid Who Was Beaten, Fed With Cockroaches And Faeces