Former Governor of Ekiti State, Ayodele Fayose has condemned Former President, Olusegun Obasanjo’s comment on the death of Buruji Kashamu, who died from COVID-19 complications at a Lagos hospital on Saturday. 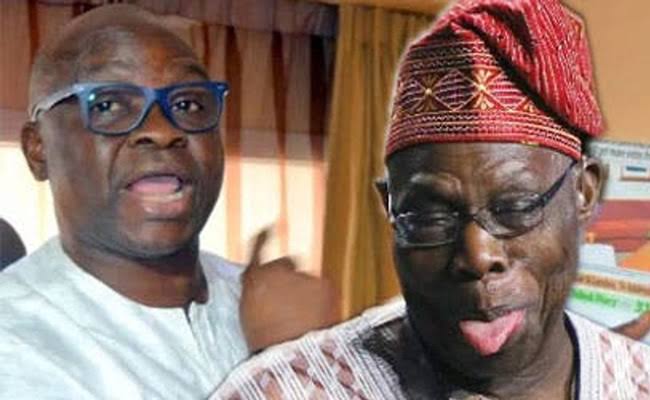 In a sarcastic condolence message, Obasanjo said Kashamu’s life was a lesson for all because in his lifetime he manoeuvred the law and politics to evade justice over his alleged criimes, but couldn’t escape death.

Reacting to the statement, Fayose in his condolence message on his Twitter page, said the comment made by Obasanjo is regrettable.

Fayose wondered why the former president did not utter such statements when Kashamu was alive. He asked Obasanjo to stop acting like “a saint”, as Nigerians will watch out for his own end.

READ:  Those Accusing Me Of Causing Mass Deaths In Kano Are 'Blind Critics' – Governor Ganduje

“I commiserate with the family of Senator Buruji Kashamu for this irreparable loss and pray for the repose of his soul. The Almighty God will console those he left behind,” Fayose said.

“I also condemn the statement made by former President Obasanjo on his (Kashamu) death.

“It is regrettable that Obasanjo could say what he said about Buruji Kashamu after his death and when he can no longer question him. Why didn’t he say that when Kashamu was alive?

“Can Obasanjo say in good conscience that he did not at some point collaborated with Kashamu and most of the things he (Kashamu) did politically were not with his collaboration?

“Nigerians will watch out for Obasanjo’s own end. He should stop forming saint because he is not. He should also remember that his own end will come too and nobody knows how the end will be.”

Before his death, Senator Kashamu was engaged in a long, legal battle against the federal government over extradition to the US to face alleged drug trafficking charges.

“The World May End Before Next RCCG Convention” – Pastor Adeboye Warns