The leader of the Indigenous People of Biafra (IPOB), Nnamdi Kanu, has warned the former governor of Abia state and the Senate Chief Whip, Orji Uzor Kalu, over his alleged plans to end the agitation for Biafra. 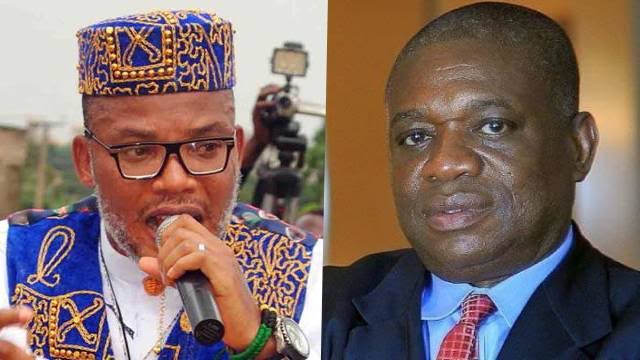 In a statement issued on Tuesday, Orji Kalu had told President Muhammadu Buhari that he can convince the IPOB leader to come to Nigeria and end Biafra agitation.

The Senate Chief Whip added that Kanu will listen to him and stop the altercation between IPOB members and security personnel in the South-East.

“If the Federal Government permits me, I will go to the United Kingdom and negotiate with Nnamdi Kanu to return to Nigeria. I will convince him to drop the agitation for Biafra because our people don’t need it,” Orji Kalu had said.

However, during a live broadcast on Radio Biafra on Wednesday evening, Nmamdi Kanu warned the Senator against coming to convince him to end the agitation of Biafra.

He said that anybody coming to him with the intention of convincing him to drop the idea of Biafra will receive the treatment Ike Ekweremadu, a former Deputy Senate President, who was beaten up by IPOB members last year in Germany.

“Anybody coming to me with intention of convincing me to drop the idea of Biafra, I can assure you what happened to Ike Ekweremadu will be a child’s play to such an individual. This is the era of saboteurs and we must be very careful.

“I have not mandated anybody to speak on my behalf or myself to meet with Nigeria government nor representative to negotiate to stop Biafra agitation. I will only meet Nigeria government to show me boundaries of Biafra land and sign the necessary documents,” Nnamdi Kanu said.

KanyiDaily had reported how Ike Ekweremadu was beaten up and publicly humiliated by suspected IPOB members in Nuremberg, Germany where he had attended the New Yam Festival of Igbo Community in 2019.

READ:  Prophet Who Pretends To Be Police Officer, Arrested For Faking Miracles And Attempted Rape